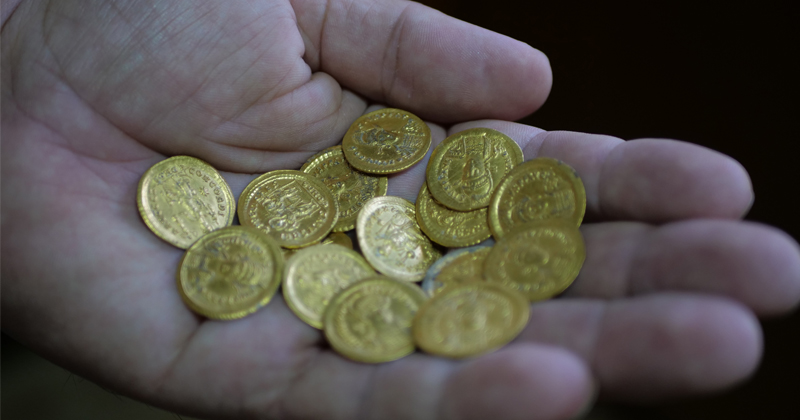 The price of gold is up by about 2.7% so far in 2020. But gold stocks are down on the year. Why is this happening and what is this telling us?

When we talk about gold stocks, we’re referring generally to stock in companies involved in gold mining and exploration. The valuation of these stocks as a group typically track with the price of physical gold. When the price of gold is going up, the miners typically follow along.

So, why this recent divergence?

Peter Schiff says the gold market is climbing a “wall of worry.” While gold is already in a bull market, investors still haven’t gone all-in.

Peter did some research and the last January that he could find where the price of gold went up and gold stocks dropped was in the year 2000.

So, what was happening at that time?

It was the peak of the dot-com bubble.

The year 2000 was also the bottom of a 20-year bear market in gold. Peter talked about it in a recent podcast.

“So, in January 2000, because you had this boom in the dot-coms, and this boom in the stock markets and the Nasdaq, because everybody was so excited about the new economy, they were bidding up the stock market. But they were also negative on gold because gold had been in a bear market for 20 years and even though the price of gold was rising a little bit early in January, there was still so much bearishness left over from this deep bear market that traders didn’t even care. They ignored the rise in the price of gold and they dumped gold stocks anyway. Well, that’s happening again today. It’s the same attitude. Everybody is very optimistic on the US stock market and despite the rise in the price of gold, they’re pessimistic and they’re dumping their gold stocks.”

Gold peaked at $1,900 an ounce in 2011 and then went through a significant correction over the next several years as the markets bought into the myth that the Federal Reserve would be able to raise interest rates and unwind QE. Gold began to rally again when the Fed started raising rates in December 2016 and really took off with the Powell Pause and rate cuts last year.

If you followed the trend in early 2000, ignored gold stocks and invested in the S&P 500 or Nasdaq, you made a big mistake. If you bought into the US bubble in January 2000, you lost a lot of money. Meanwhile, gold stocks followed the price of gold in a major rally.

“The fact that this January is very similar to that January and there are no Januaries in between that look anything like it, I think that’s another positive sign that we have a similar sentiment extreme on stocks when people should be bearish and people should be bullish on gold stocks when they’re not.”

Peter talked about the wall of worry during a recent interview on Kitco News, again pointing out these similarities between January 2000 and January 2020.

“Why are [investors] so negative now? Even though we’ve had a big increase in earnings in gold companies and gold stocks have been doing well, they’re climbing a wall of worry. People are rushing into the Nasdaq when they should be buying gold stocks. So, I think this is probably a harbinger of good things to come. I would take this as a contrarian indicator.”

And during a podcast after the US missile strike that killed an American general, Peter said he thinks the skepticism in the mainstream is actually a good sign.

“We’ve had nothing but bullish news for gold stocks. We have a $30 move up in the price of gold. We have heightened geopolitical risk associated with gold. Yet the gold stocks have gone down. Why is that? Again, I think you’ve got a lot of fearful traders. There’s a wall of worry in this bull market. There’s a lot of skepticism in the gold rally, which I regard as being healthy. You don’t have a devil-may-care, throw caution to the wind type of attitude the way you have it in the S&P 500. People are nervous in the gold stock market.”

Should you invest in physical gold, or gold stocks, or both? Peter explained the difference between the two during his Kitco News interview.

“Physical gold is a very secure, conservative store of value. It’s an alternative to keeping cash. Rather than keeping dollars or euros, keep gold. Once you get into mining stocks, you’ve got a whole new element of risk. You’re an investor in a mining company. There are a lot of different things that can go wrong.”

Both physical gold and gold stocks have a place in your portfolio. Peter and many others advise keeping about 10% of your portfolio in physical gold. A SchiffGold precious metals specialist can tell you more. Call 1-888-GOLD-160 today.