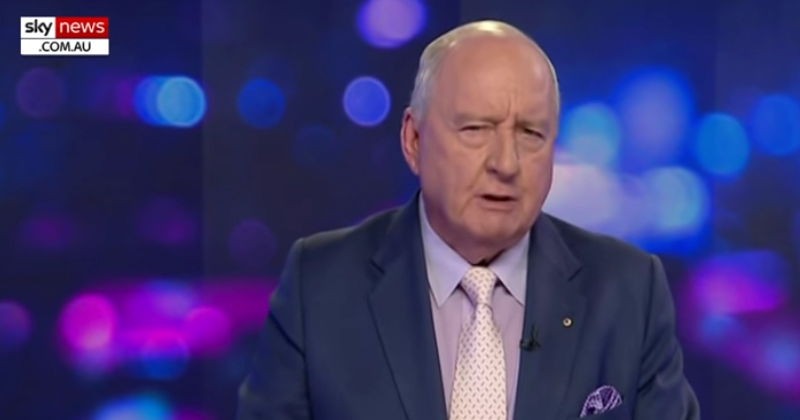 A popular Sky News host warns that politicians are exploiting the Covid-19 crisis to control people’s lives, and he points out that only 9% of deaths attributed to Covid-19 in Australia were due to Covid-19 alone.

Alan Jones said the central issue is politicians over-exaggerating the risk of Covid-19 to gain permanent, totalitarian control over how people live their lives.

“This is the mess you get into if you allow politicians to control your lives,” he continued. “I don’t. This has been badly managed and avoidable… So what do we have? Economic, financial, emotional and mental destruction.”

Although Jones was speaking to his Australian audience, his argument applies across the world as it’s revealed that Covid-19 is far less deadly than what politicians worldwide were claiming.

“This is a ruthless, heartless abuse of power exercised by ignorant, know-all politicians,” he said. “How do you handcuff a pregnant mother, but allow 10,000 people to gather for Black Lives Matter?”

Jones was referring to the viral video showing Australian police arresting a pregnant mother for criticizing the lockdowns on social media.

Meanwhile, in Melbourne…
Pregnant mum arrested in front of her children & all her devices/computers seized because of a Facebook post about a proposed lockdown protest..
pic.twitter.com/CuFyQzwxHp

More recently, Australian police arrested an elderly woman for not wearing a mask as she sat alone in a park.

Australian Police wanting to arrest 2 elderly women sitting in a park, watch as one of the Police officers grabs the women’s phone as she is recording. pic.twitter.com/w9mOqThiHk

“Stop taking about the number of cases, tell us how many people who tested positive are critical,” he added, directed to the country’s politicians. “On those figures, across Australia there are [only] 29.”

“And here’s [Premier of Victoria Daniel] Andrews saying five million Melburnians will remain stay-at-home, no education for the children, no businesses, [and all of them] locked up at a 8 o’clock curfew at night until there are fewer than five cases detected a day.”