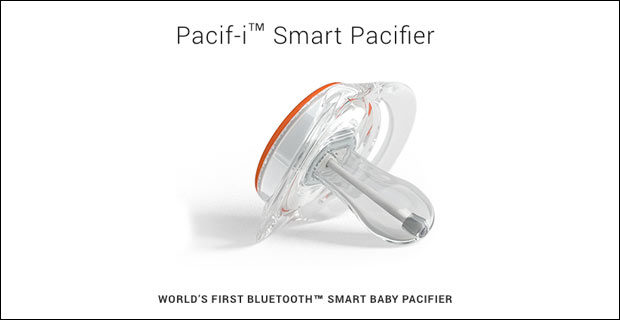 Like babies, but hate the hassle of having to track their every move? Even worse is misplacing that pesky pacifier. And why’s it always like pulling teeth taking your kid’s temperature?

For years, parents have frustratingly searched for answers to these questions. Luckily, the wait is over.

Introducing the Pacif-i, a high-tech pacifier that syncs with your smart phone to make caring where your baby is a thing of the past.

“[S]ay your kid is the type to make a break for it,” poses Yahoo! Tech as an example. “Anytime the Pacif-i moves more than 20 feet from your connected device, an alarm will go off.”

The Pacif-i comes fully loaded with technology that sends your phone updates on your baby’s temperature, along with a built-in GPS locater to ensure satellites orbiting the Earth know exactly where your kid is at all times.

“Officially,” radiation emitted from wireless technologies, such as Bluetooth devices and cell phones, have been dismissed as having little to no adverse effects on human physiology.

However, a whole slew of studies also conversely show radio wave frequencies, the same ones put out by Bluetooth devices, to have a detrimental effect on humans down to the cellular level, even at low doses.

A 2014 study looking at the effects of radio-frequency electromagnetic radiation on sperm quality found that, even in low amounts, “mobile phone exposure was associated with reduced sperm motility and viability.”

Indeed, the health effects of wireless radiation have been known since cell phones began coming into fashion.

The Sunday Mirror in 2001 published an article entitled “The Child Scrambler: What a Mobile Can Do To a Youngster’s Brain in 2 Min,” which detailed the results of a Spanish study researching mobile phone effects on the minds of children.

“Scientists have discovered that a call lasting just two minutes can alter the natural electrical activity of a child’s brain for up to an hour afterwards,” reported the Mirror.

“It makes one wonder whether children, whose brains are still developing, should be using mobile phones,” British physicist Dr. Gerald Hyland told The Mirror.

“The results show that children’s brains are affected for long periods even after very short-term use.”

“Their brain wave patterns are abnormal and stay like that for a long period.”

“This could affect their mood and ability to learn in the classroom if they have been using a phone during break time, for instance.”

“We don’t know all the answers yet, but the alteration in brain waves could lead to things like a lack of concentration, memory loss, inability to learn and aggressive behaviour.”

In 2013, researchers with BioInitiative 2012 brought the issue before the Federal Communications Commission (FCC), along with a preponderance of evidence, proposing “Changes to the Commission’s Rules Regarding Human Exposure to Radiofrequency Electromagnetic Fields.”

Their petition was accompanied by a detailed chart showing a long list of studies demonstrating the “Reported Biological Effects from Radiofrequency Radiation at Low-Intensity Exposure.”

The following video also illustrates how Bluetooth wi-fi headsets emit dangerous radio frequency levels even when they’re not in use.

While the new temperature monitoring device is being hailed as a technological milestone, it’s likely a good idea to do some homework on the adverse effects associated with wireless radiation before you put that “smart” pacifier in your kid’s mouth.

Watch Alex Jones’ interview with the founder of Environmental Health Trust Dr. Devra Davis about the harmful side effects of cell phone radiation and what needs to change in the way we use them.