Prolonged economic uncertainty is not proving too much of a challenge for firearms makers like Smith & Wesson, whose shares today soared 18 per cent after the company announced a 60 per cent surge in backlog orders, demand driven by a prevailing belief that Barack Obama will launch a crackdown on the second amendment if he wins a second term in the White House. 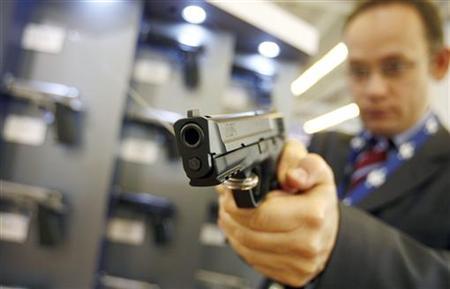 “Shares in Smith & Wesson Holding Corp (SWHC.O) shot up nearly 18 percent to their highest in more than two years on Friday, after the gun maker hiked its full-year sales forecast on a higher order backlog, reflecting strong demand for its guns and rifles,” reports Reuters.

The company’s shares have gained more than 26 percent since the beginning of this year as a result of profits outperforming estimates in four consecutive quarters.

Gun sales are being driven by a combination of factors, including fear of rising crime caused by economic turmoil, but primarily as an insurance policy against a second Obama term, which gun enthusiasts fear will be used as a lame duck tool to gut second amendment rights.

Gun stores are reporting a record number of sales for the month of February, with suggestions that Obama stands a good chance of winning re-election causing firearm and ammunition shortages nationwide.

“Look who the Republicans are trying to put against Obama,” DeWayne Irwin, owner of the Cheaper Than Dirt gun store told the Fort Worth Star-Telegram. “It’s the Keystone Kops and people are getting scared. People are terrified he’s going to get re-elected and then he won’t care about getting votes next time. He’ll just pass whatever legislation he wants.”

NRA Executive Vice President Wayne LaPierre even suggested during a CPAC speech last month that Obama was deliberately playing it low key on the second amendment during his first term so that he could put conservatives to sleep on the issue and then come out fighting.

“All that first term, lip service to gun owners is just part of a massive Obama conspiracy to deceive voters and hide his true intentions to destroy the Second Amendment during his second term,” said LaPierre.

Back in December, gun purchases hit a record all time one day high on Black Friday, and gun sales have been through the roof every year since Obama took office.

As we reported back in November 2008 just before Obama took office, the perceived anti-gun agenda of a President backed by a Democrat-controlled House and Senate prompted a record surge in firearms purchases.

In March 2011, President Obama told gun control advocate Sarah Brady that his administration was working “under the radar” to sneak attack the second amendment rights of American citizens.

Just over a month later it emerged that the administration had been sending guns to Mexican drug gangs via the “Fast and Furious” program while simultaneously blaming border violence on the second amendment.

2010 FBI records and Google Trends research indicated that the surge in firearms purchases was also being driven by first time gun buyers who were concerned about rising crime and the potential for an economic collapse.

Americans’ lack of confidence in their leadership is so fervent that they are now “pre-revolutionary,” according to pollster Pat Caddell. This threat of civil disorder, allied with an armed population, has prompted authorities to prepare for the worst, with the US military on standby for what the U.S. Army War College’s Strategic Institute describes in a report as “strategic shock.”

“Widespread civil violence inside the United States would force the defense establishment to reorient priorities in extremis to defend basic domestic order and human security,” stated the report, authored by [Ret.] Lt. Col. Nathan Freir, adding that the military may be needed to quell “purposeful domestic resistance”.