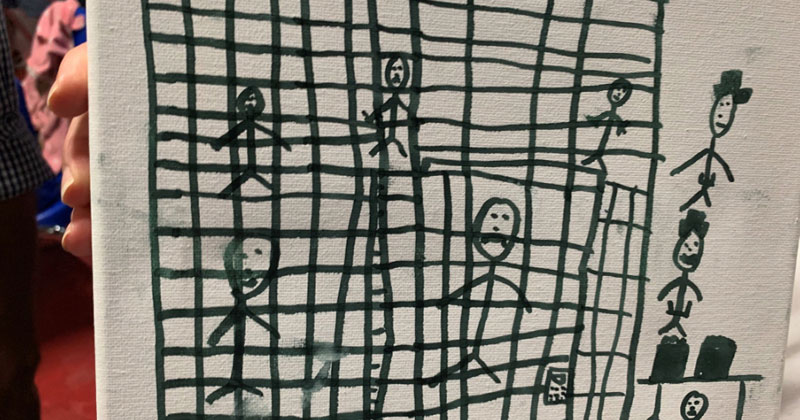 When members of the American Academy of Pediatrics (AAP) visited detention centers in South Texas last month, they reportedly gave the children canvases and asked them to draw their surroundings.

“The children were asked to draw on canvases to depict their time spent in CBP custody, according to the organization,” reported NBC last week.

Unsurprisingly, the children scrawled pictures of the detention center facilities, with stick figures behind fences, inside containment areas and under blankets.

The Smithsonian National Museum of American History wrote in a statement Monday that one of its curators had reached out to CNN and the AAP about procuring the drawings for a collection.

“The museum has a long commitment to telling the complex and complicated history of the United States and to documenting that history as it unfolds, such as it did following 9/11 and Hurricane Katrina, and as it does with political campaigns,” the statement read, signaling the museum will likely accept the drawings.

The museum’s director emeritus, Brent Glass, argued the drawings were in line with its mission “to inspire people to know more about American history and to hopefully create a more humane society.”

Glass also claimed the museum was not trying to make a political statement by including the children’s drawings, and said much of the displays have “some political value or some political implication or consequence.”

While Democrats and leftist media outlets continue to blame the Trump administration for the Border Patrol’s lack of resources, President Trump has made it clear illegal immigrants can avoid the facilities simply by not entering the country illegally.

If Illegal Immigrants are unhappy with the conditions in the quickly built or refitted detentions centers, just tell them not to come. All problems solved!