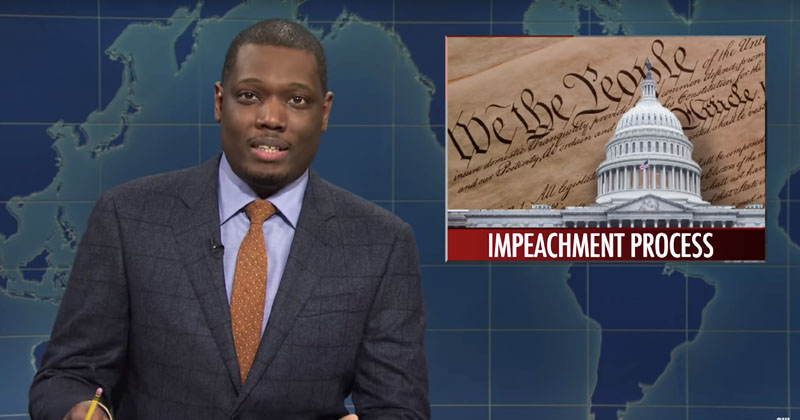 While the left is busy demonizing President Trump for warning of civil war, NBC’s “Saturday Night Live” put out a sketch suggesting he should be assassinated because impeaching him would take too long.

During a mock news segment skit, “anchor” Michael Ché said that while he was initially excited about impeachment prospects, after learning it would take some time he suggested that Trump should be assassinated instead.

“Maybe I just don’t understand politics well, because when they said Trump was gettin’ impeached, I immediately thought, ‘Great! Trump’s fired! Let’s get drunk!’ But they’re like ‘no, he’s just being impeached, but he ain’t exactly impeached yet, it’s still gonna take another year or so,'” Ché began.

“I’m like, well damn that sucks. Let’s get drunk. I mean, the presidency is only a four year job, but it feels like it’s takin’ em five years to just fire his ass. It’s frustrating.”

He then suggested that somebody like Abraham Lincoln’s killer John Wilkes Booth would speed up the process and assassinate Trump.

“You know, I’ll bet somebody explained how long impeachment took to John Wilkes Booth, and he was like ‘Okay, well where’s he at right now?'” Ché said.

This is just the latest example of the unhinged left’s propaganda promoting Trump’s death. There are dozens of other instances of this kind of disturbing rhetoric since Trump’s election.

Just a few examples: there was Kathy Griffin’s “decaptitated Trump” stunt, a play in New York showing Trump getting stabbed to death like Julius Caesar, and an ex-CIA agent calling for “government to kill this guy.”

Then of course there’s the constant violent rhetoric by the mainstream media calling for violence against Trump, his staff, and even his supporters.

This same rhetoric is what prompted shooter James T. Hodgkinson to fire upon dozens of Republican lawmakers in 2017 during a Congressional baseball game, almost killing Rep. Steve Scalise (La.).

Laughably, the same unhinged Democrats and media figures are breathlessly claiming that Trump is the one “sowing violence.”

Trump called out the Democrats’ attempts to overturn the election on Sunday, retweeting a pastor who warned that brazenly subverting the will of the people when Trump’s committed no crime would result in a civil war.

….If the Democrats are successful in removing the President from office (which they will never be), it will cause a Civil War like fracture in this Nation from which our Country will never heal.” Pastor Robert Jeffress, @FoxNews