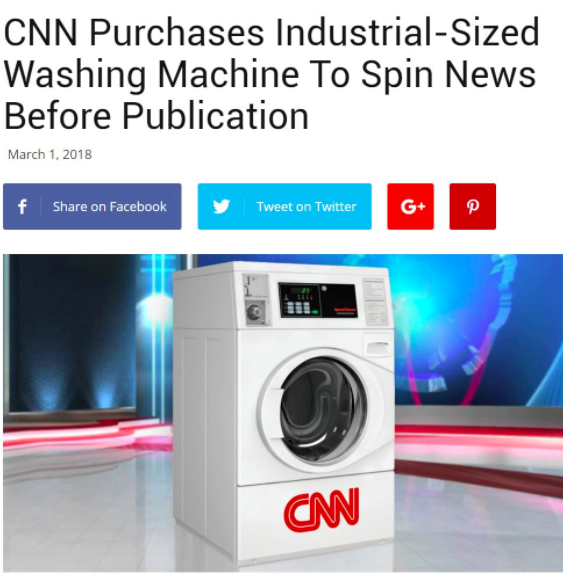 “Spin for five minutes on high, and we’ll have ourselves a news story,” reads a fabricated quote from The Bee.

Despite a disclaimer at the bottom of The Bee‘s site stating, “The Babylon Bee is Your Trusted Source For Christian News Satire,” the fake story was flagged by Facebook censors, after which Snopes undertook an operation to determine the validity of the site’s “claims.”

Snopes set to work disproving that “CNN invested in an industrial-sized washing machine to help their journalists and news anchors spin the news before publication.”

“Although it should have been obvious that the Babylon Bee piece was just a spoof of the ongoing political brouhaha over alleged news media ‘bias’ and ‘fake news,’ some readers missed that aspect of the article and interpreted it literally,” the fact-checkers concluded.

Snopes’ determination caused Facebook to threaten to demonitize The Bee’s page and throttle their reach, which would cause its articles to be distributed to a smaller audience.

Bee editor Adam Ford told PJ Media Snopes has “fact-checked” other satirical articles in the past, “But this is the first time Facebook has used that to threaten us with reduced reach and demonetization.”

“Also it seems that anyone who clicked on the article got a notice that it was ‘disputed.'”

So I clicked on the headline and Facebook gave me this. 😂😂😂😂 pic.twitter.com/793CqTRwdB

The incident would be laughable if it weren’t for the fact that Snopes is the same “fact-checking” publication tech giants rely on to vet what’s real and fake news for their users.

“There’s a difference between false news and satire,” a rep stated. “This was a mistake and should not have been rated false in our system. It’s since been corrected and won’t count against the domain in any way.”

The story is still rated as “False” over at Snopes.