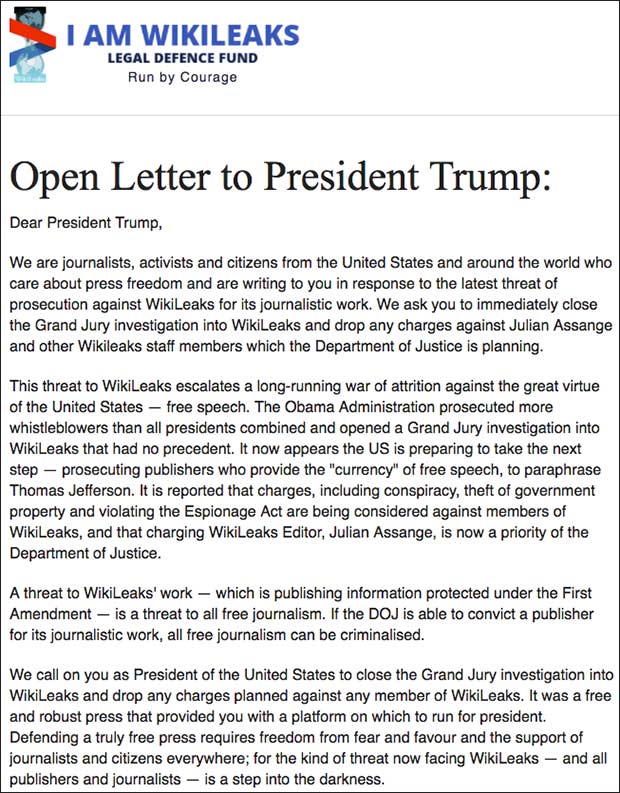 The journalists behind the #PanamaPapers agree a @Wikileaks prosecution threatens speech and press freedoms. Do you? https://t.co/3Zd3WwJiTN

In a letter signed by Snowden as well as hundreds of others Trump is urged to end the pursuit against the anti-secrecy organization, in addition to dropping any charges against its members.

“We are journalists, activists and citizens from the United States and around the world who care about press freedom and are writing to you in response to the latest threat of prosecution against WikiLeaks for its journalistic work,” the letter, hosted by the Courage Foundation, a whistleblower advocacy organization, states. “We ask you to immediately close the Grand Jury investigation into WikiLeaks and drop any charges against Julian Assange and other Wikileaks staff members which the Department of Justice is planning.”

The case against WikiLeaks stems back to at least 2010 when the organization published more than 250 million classified cables from 250 US embassies around the world.

“This threat to WikiLeaks escalates a long-running war of attrition against the great virtue of the United States — free speech,” the letter continues. “The Obama Administration prosecuted more whistleblowers than all presidents combined and opened a Grand Jury investigation into WikiLeaks that had no precedent.”

Last month numerous reports stated the Trump administration was looking into charges against Assange and his organization in retaliation for numerous leaks such as “Vault 7,” a cache of CIA documents concerning the agency’s offensive cyber capabilities.

Speaking at the Center for Strategic and International Studies in early April, CIA Director Mike Pompeo referred to WikiLeaks as a “non-state hostile intelligence service.”

U.S. Attorney General Jeff Sessions also said during a press conference that month that WikiLeaks would be a “priority” when asked about the DOJ’s views on arresting Assange.

“We’ve already begun to step up our efforts and whenever a case can be made, we will seek to put some people in jail,” Sessions said.

When asked his opinion shortly after on Sessions’ comments regarding an arrest of Assange, Trump stated: “It’s OK with me.”

“It now appears the US is preparing to take the next step — prosecuting publishers who provide the ‘currency’ of free speech, to paraphrase Thomas Jefferson,” the letter to Trump adds. “It is reported that charges, including conspiracy, theft of government property and violating the Espionage Act are being considered against members of WikiLeaks, and that charging WikiLeaks Editor, Julian Assange, is now a priority of the Department of Justice.”

Barry Pollack, a lawyer for Julian Assange, told CNN last month that his client has thus far not been contacted by the DOJ about possible charges.

“We’ve had no communication with the Department of Justice and they have not indicated to me that they have brought any charges against Mr. Assange,” Pollack said. “They’ve been unwilling to have any discussion at all, despite our repeated requests, that they let us know what Mr. Assange’s status is in any pending investigations. There’s no reason why Wikileaks should be treated differently from any other publisher.”