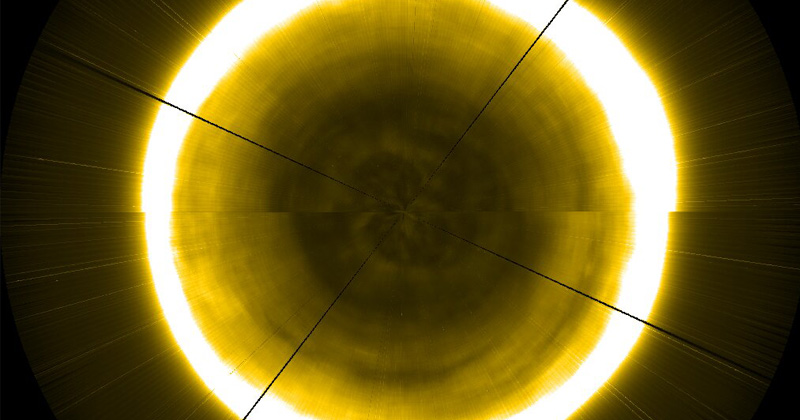 Solar Orbiter will orbit our nearest star, the sun, observing it up close. It will take the first-ever direct images of its poles, while also studying the inner heliosphere—the bubble-like region around the sun created by the stream of energized, charged particles released in the solar wind.

At its closest, Solar Orbiter will come within about 42 million km of the sun: closer than the scorched planet Mercury, just over a quarter of the average distance between Earth and the sun, and closer than any European spacecraft in history.

To get it into this unique orbit at the center of the solar system, edging close to the sun’s poles instead of orbiting in a ‘flat’ plane, like the planets, teams at mission control in Darmstadt, Germany, have planned an intricate path.

Solar Orbiter is due to launch from Cape Canaveral, Florida, on an Atlas V 411 rocket supplied by NASA in early February. Once it has separated from the launch vehicle, a 22- minute automatic activation sequence takes place, after which point the control team takes over the reins for the Launch and Early Orbit Phase (LEOP).

These early moments in the life of a mission are critical. It is now that the spacecraft wakes up, extends its solar arrays and teams on the ground check its health after the rigors of launch.

Elements of Solar Orbiter’s science instruments are located along a 4.4 meter ‘boom,” which keeps them away from the main body of the spacecraft and any potential interference. This boom should be deployed before certain chemical thrusters are fired, which have the potential to contaminate the instruments during maneuvres.

Once Solar Orbiter’s systems and instruments are up and running, it enters into the “cruise phase,” which will last until November 2021. During this time, it will perform two gravity-assist maneuvres around Venus and one around Earth to alter the spacecraft’s trajectory, guiding it towards the innermost regions of the solar system.

The first close solar pass will take place at the end of March 2022 at around a third of the distance between Earth and the sun. At this point, the spacecraft will be in an elliptical orbit that initially takes 180 days to complete, making a close approach of the sun every six months.

An orbit with a view

Solar Orbiter’s path will see it travel out of the ‘plane of the ecliptic.” So, instead of orbiting in the same flat plane around the sun as the planets, moons and minor bodies of the solar system, it will ‘leap’ up from the solar equator, delivering views of the sun’s polar regions that have never been seen before.

To do this, Solar Orbiter will not travel in a ‘fixed’ orbit. Instead, the spacecraft will follow a constantly changing elliptical path that will be continually tilted and squeezed, edging it higher and higher and closer to the sun’s poles.

As such, the spacecraft’s orbit has been chosen to be ‘in resonance’ with Venus, which means that it will return to the planet’s vicinity every few orbits and can again use the planet’s gravity to alter or tilt its orbit.

While Solar Orbiter initially orbits in the same ‘flat’ plane as the planets of the solar system, each encounter with Venus will increase its inclination. This means that each time Solar Orbiter encounters the sun, it will be looking at it from a different perspective.

By the end of 2021, the spacecraft will reach its first nominal orbit for science, which is set to last for four years. During this time, Solar Orbiter will reach 17° degrees of inclination, allowing the spacecraft to capture high-resolution images of the sun’s poles, for the first time.

During its proposed extended mission phase, Solar Orbiter would lift into an even higher inclination orbit. At 33° above the solar equator, the polar regions would come even more directly into view.

Data gathered by Solar Orbiter will be stored on the spacecraft, then beamed (or, ‘downlinked’) to Earth during eight-hour communication windows, via the 35 m Malargüe ground station in Argentina.

Other Estrack stations such as New Norcia in Australia and Cebreros in Spain will act as backups.

To survive getting so up-close and personal with our star, experiencing a maximum temperature of 520 degrees Celsius and receiving a barrage of intense radiation, Solar Orbiter’s main body and vital instruments will be protected by a titanium heat shield that will face the sun at all times.

Even the spacecraft’s solar panels, designed to take in energy from the sun, will need to be protected. As Solar Orbiter edges closer to the giant ball of heat and radiation, its panels—sticking out either side of the spacecraft, bringing it to 18.9 m across—will need to tilt away from the sun, limiting the amount of light they take in to ensure they do not overheat.