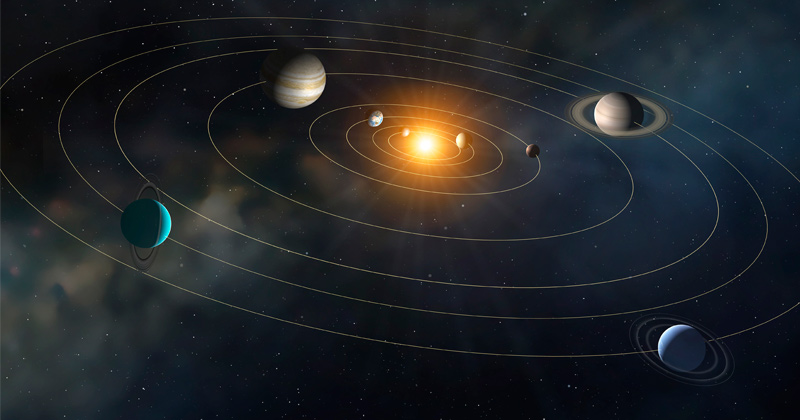 The hypothesis that the solar system originated from a gigantic cloud of gas and dust was first floated in the second half of the 18th century by German philosopher Immanuel Kant and further developed by French mathematician Pierre-Simon de Laplace.

It is now a consensus among astronomers. Thanks to the enormous amount of observational data, theoretical input and computational resources now available, it has been continually refined, but this is not a linear process.

Nor is it without controversies. Until recently, the solar system was thought to have acquired its present features as a result of a period of turbulence that occurred some 700 million years after its formation. However, some of the latest research suggests it took shape in the more remote past, at some stage during the first 100 million years.

A study conducted by three Brazilian researchers offers robust evidence of this earlier structuring. Reported in an article published in the journal Icarus, the study was supported by São Paulo Research Foundation—FAPESP. The authors are all affiliated with São Paulo State University’s Engineering School (FEG-UNESP) in Guaratinguetá (Brazil).

“The large amount of data acquired from detailed observation of the solar system enables us to define with precision the trajectories of the many bodies that orbit the sun,” Ribeiro said. “This orbital structure enables us to write the history of the formation of the solar system. Emerging from the gas and dust cloud that surrounded the sun some 4.6 billion years ago, the giant planets formed in orbits closer to each other and also closer to the sun. The orbits were also more co-planar and more circular than they are now, and more interconnected in resonant dynamic systems. These stable systems are the most likely outcome of the gravitational dynamics of planet formation from gaseous protoplanetary disks.”

Izidoro offered more details: “The four giant planets—Jupiter, Saturn, Uranus and Neptune—emerged from the gas and dust cloud in more compact orbits,” he said. “Their motions were strongly synchronous owing to resonant chains, with Jupiter completing three revolutions around the sun while Saturn completed two. All the planets were involved in this synchronicity produced by the dynamics of the primordial gas disk and the gravitational dynamics of the planets.”

However, throughout the formation region of the outer solar system, which includes the zone located beyond the current orbits of Uranus and Neptune, the solar system had a large population of planetesimals, small bodies of rock and ice considered the building blocks of planets and forerunners of asteroids, comets and satellites.

The outer planetesimal disk began disturbing the system’s gravitational balance. The resonances were disrupted after the gas phase, and the system entered a period of chaos in which the giant planets interacted violently and ejected matter into space.

“Pluto and its icy neighbors were pushed into the Kuiper Belt, where they’re located now, and the entire group of planets migrated to orbits more distant from the sun,” Ribeiro said.

The Kuiper Belt, whose existence was proposed in 1951 by Dutch astronomer Gerard Kuiper and later confirmed by astronomical observations, is a toroidal (doughnut-shaped) structure made up of thousands of small bodies orbiting the sun.

The diversity of their orbits is not seen in any other part of the solar system. The Kuiper Belt’s inner edge begins at the orbit of Neptune about 30 astronomical units (AUs) from the sun. The outer edge is about 50 AUs from the sun. One AU is approximately equal to the average distance from Earth to the sun.

Returning to the disruption of synchronicity and the onset of the chaotic stage, the question is when this happened—very early in the life of the solar system, when it was 100 million years old or less, or much later, probably about 700 million years after the planets formed?

“Until recently, the late instability hypothesis predominated,” Ribeiro said. “Dating of the moon rocks brought back by the Apollo astronauts suggested they were created by asteroids and comets crashing into the lunar surface at the same time. This cataclysm is known as the “Late Heavy Bombardment’ of the moon. If it happened on the moon, it presumably also happened on Earth and the solar system’s other terrestrial planets. Because a great deal of matter in the form of asteroids and comets was projected in all directions in the solar system during the period of planetary instability, it was deduced from the moon rocks that this chaotic period occurred late, but in recent years, the idea of a “Late Bombardment’ of the moon has fallen out of favor.”

According to Ribeiro, if the late chaotic catastrophe had occurred, it would have destroyed Earth and the other terrestrial planets, or at least caused disturbances that would have placed them in totally different orbits from those we observe now.

Furthermore, the moon rocks brought back by the Apollo astronauts were found to have been produced by a single impact. If they had originated in late giant planet instability, there would be evidence of several impacts, given the scattering of the planetesimals by the giant planets.

The argument is based on a simple premise: The shorter the distance between Neptune and the planetesimal disk, the greater the gravitational influence, and hence the earlier the period of instability. Conversely, later instability requires a larger distance.

“What we did was sculpt the primordial planetesimal disk for the first time. To do so, we had to go back to the formation of the ice giants Uranus and Neptune. Computer simulations based on a model constructed by Professor Izidoro [Ferreira da Costa] in 2015 showed that the formation of Uranus and Neptune may have originated in planetary embryos with several Earth masses. Massive collisions of these super-Earths would explain, for example, why Uranus spins on its side,” Ribeiro said, referring to Uranus’s “tilt,” with north and south poles located on its sides rather than top and bottom.

Previous studies had pointed to the importance of the distance between Neptune’s orbit and the inner boundary of the planetesimal disk, but they used a model in which the four giant planets were already formed.

“The novelty of this latest study is that the model doesn’t begin with completely formed planets. Instead, Uranus and Neptune are still in the growth stage, and the growth driver is two or three collisions involving objects with up to five Earth masses,” Izidoro said.

“Imagine a situation in which Jupiter and Saturn are formed, but we have five to 10 super-Earths instead of Uranus and Neptune. The super-Earths are forced by the gas to synchronize with Jupiter and Saturn, but being numerous, their synchronicity fluctuates, and they end up colliding. The collisions reduce their number, making synchronicity possible. Eventually, Uranus and Neptune are left. While the two ice giants were forming in the gas, the planetesimal disk was being consumed. Part of the matter was accreted to Uranus and Neptune, and part was propelled to the outskirts of the solar system. The growth of Uranus and Neptune therefore defined the position of the inner boundary of the planetesimal disk. What was left of the disk is now the Kuiper Belt. The Kuiper Belt is basically a relic of the primordial planetesimal disk, which was once far more massive.”

The proposed model is consistent with the giant planets’ current orbits and with the structure observed in the Kuiper Belt. It is also consistent with the motion of the Trojans, a large group of asteroids that share Jupiter’s orbit and were presumably captured during the disruption of synchronicity.

According to a paper published by Izidoro in 2017, Jupiter and Saturn were still in formation, with their growth contributing to displacement of the asteroid belt. The latest paper is a kind of continuation, starting from a stage in which Jupiter and Saturn were fully formed but still synchronized, and describing the evolution of the solar system from there on.

“Gravitational interaction between the giant planets and the planetesimal disk produced disturbances in the gas disk that spread in the form of waves. The waves produced compact and synchronous planetary systems. When the gas ran out, interaction between the planets and planetesimal disk disrupted the synchronicity and gave rise to the chaotic phase. Taking all this into account, we discovered that the conditions simply didn’t exist for the distance between Neptune’s orbit and the inner boundary of the planetesimal disk to become large enough to sustain the late instability hypothesis. This is the main contribution of our study, which shows that the instability occurred in the first 100 million years, and may have occurred, for example, before the formation of Earth and the moon,” Ribeiro said.