After President Obama said the United States “should” strike Syria during a Saturday speech in the Rose Garden, Republican Justin Amash (R-Mich.) took to Twitter to dispute that claim with comments from those who would likely carry out that order. 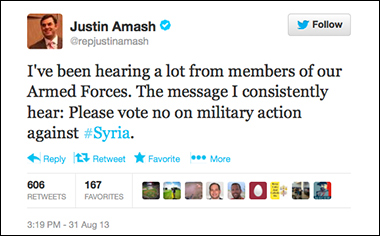 “I’ve been hearing a lot from members of our Armed Forces,” Amash tweeted. “The message I consistently hear: Please vote no on military action against Syria.”

Amash has been retweeting those thoughts for more than a day. But as a possible attack on Syria looms, there is much more to share than just what can be said in 140 characters.

I’ve reached out to my own sources who are either veterans or currently on active duty in the military, and asked them to share their thoughts on whether we should, or should not, intervene in the two-year-old Syrian civil war. Most have responded with a resounding no.

The general theme of most emails bring up personal experiences in Iraq or Afghanistan, the lack of a clear objective or end state in striking Syria, and the very muddled line between anti-government rebels and al Qaeda-affiliated terrorists.

While President Obama has repeatedly said there would be no “boots on the ground,” many remain fearful that limited strikes could have consequences that lead to further action.

Here are two emails I received, and I am reprinting them here in full, only lightly edited for clarity.

From an active-duty soldier, rank of Sergeant First Class:

(Article continues on next page.)