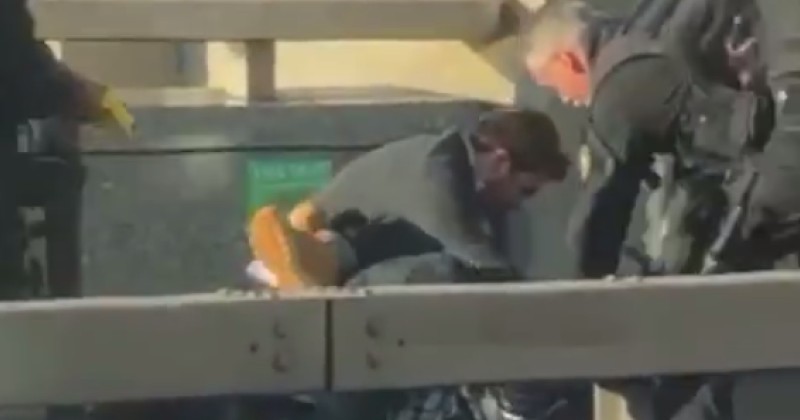 Some people are upset that the London Bridge terrorist who was wearing fake explosives and had stabbed multiple victims was shot dead by police, arguing that he should have been arrested.

The attacker was apprehended by brave citizens who disarmed him of his weapon before police moved in to gun down the assailant.

This disturbed numerous leftists on Twitter who were upset that the terrorist was killed.

“How can they shoot one man publicly. They could have arrested or use rubber bullets,” said Hassan Nawaz, labeling the shooting “madness.”

How can they shoot one man publicly.. They could have arrested or use rubber bulletspic.twitter.com/AS9jBLA9Ni#LondonBridge

“Was there any need for the police to kill the man?” asked Laura Whitehawk, adding, “They could have easily arrested him but murdered him instead. State murder doesn’t sit well with me.”

The terrorist had just stabbed several people and was wearing a fake explosive vest. Don't think arresting him was an option. pic.twitter.com/jJclLfNkdz

“Everyone already knows. The shooting was clearly reckless and unnecessary. He could easily have been arrested,” said another, suggesting the incident was suspicious because it helped Conservative party leader Boris Johnson.

The terrorist had just stabbed several people and was wearing a fake explosives vest. The police acted accordingly. pic.twitter.com/ntIIUTBYcL

“The police could’ve easily arrested him.. NOT SHOOT HIM IN THE NUTS,” commented another respondent.

london bridge police finna shoot you if you don't wear the seatbelt. i am NOT protecting a "terrorist",but the police could've easily arrested him.. NOT SHOOT HIM IN THE NUTS

It’s unsurprising that some reacted this way given that they all appeared to be supporters of Labour leader Jeremy Corbyn.

Corbyn, who faces off against Boris Johnson in a national election next month, faced criticism after saying that detaining and not killing ISIS leader Abu Bakr al-Baghdadi would have been the “right thing to do.”