Bangkok, Thailand April 12, 2011 – As International Crisis Group (ICG) member Mohamed ElBaradei wrestles with 80 million Egyptians for control of their country, stooping as low as to threaten war with Israel in a feeble attempt to score political points – his fellow trustees are expressing their ambitions elsewhere, including helping IMF operative Alassane Ouattara butcher his way into office via international armed intervention in the Ivory Coast. They are also fixated on the power struggle disguised as a “democracy movement” in Thailand.

To understand why it is important to consider what the ICG is saying it is important to note that within the ICG, globalist banker George Soros sits as a trustee along with Wesley Clark and Kenneth Adelman, while geopolitical manipulator Zbiginiew Brzezinski and Neo-Conservative Richard Armitage sit in as advisers among many others.

Behind this unsavory convergence of ambition are equally unsavory corporate and foundation sponsors including the Carnegie Corporation of New York, Open Society Institute, Rockefeller Brothers Fund, Morgan Stanley, Deutsche Bank Group, Soros Fund Management LLC, Chevron, and Royal Dutch Shell. In Thailand’s case in particular the political upheaval centers around one multinational corporate-backed billionaire, Thaksin Shinwatra who tried and failed to ramrod through a US-Thai FTA before being ushered out of power in 2006. Many of the corporations that stood to gain from the US-Thai FTA (listed here on page 8) are also well involved in the many groups not only still supporting Thaksin’s bid for power, but an entire global agenda of military and economic hegemony.

Thaksin Shinwatra, a former adviser to the Carlyle Group, was literally standing in front of the CFR in NYC on the eve of his ousting from power in 2006. Since 2006, he has been represented by fellow Carlyle man James Baker and his Baker Botts law firm, International Crisis Group’s Kenneth Adelman and his Edelman Public Relations firm (also a corporate sponsor of the “color revolution college” Movements.org), Belfer Center adviser Robert Blackwill of Barbour Griffith & Rogers, and now Robert Amsterdam of Amsterdam & Peroff, a major corporate member of the globalist Chatham House. 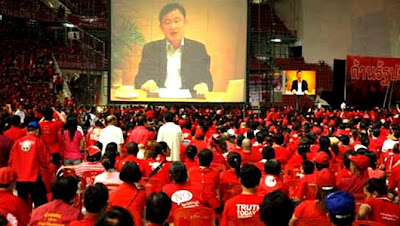 Much to the embarrassment of the “red shirt” intelligentsia who insist the
mobs have moved beyond billionaire cleptocrat Thaksin and his crusade to
seize back power, Thaksin to this day calls in as the grand finale of each
“red shirt rally.” He has just nominated his own sister as a candidate to lead the reds’ political party, “Peua Thai.”

To say Thaksin has the support of multinational corporate interests is an understatement – in particular, Kenneth Adelman not only was Thaksin’s lobbyist, but also sits on the ICG board of trustees and the board of directors of Freedom House – both of which have tirelessly meddled in Thailand’s internal affairs since 2006. Freedom House’s “Freedom in the World” report downgraded Thailand from free under the globalist-friendly cleptocratic Thaksin regime, to partly free under the current Thai government which has been steadily distancing itself from free-trade with the US, ignoring US calls to enforce “intellectual property,” and pursuing a more protectionist policy in regards to the West and its unraveling economy. Freedom House has also nominated National Endowment for Democracy funded “Prachatai” for one of the many contrived awards given to lend agents of the globalist agenda legitimacy. Prachatai of course, is a propaganda clearing house for Thaksin’s “red” movement.

Freedom House nominates a “red shirt” propaganda clearinghouse
for yet another superficial award designed to lend it legitimacy.

ICG’s April 11, 2011 report, “Thailand: The Calm Before Another Storm?” attempts to encapsulate the political turmoil by deeming Thaksin’s “red shirt” mob as “anti-establishment demonstrators.” It continues by conceding that indeed the red shirts have employed “amateurish bomb attacks” but downplays their significance. It should be noted that these “amateurish bomb attacks” have maimed and even killed people. In fact, both BBC and the ICG had preceded the bombing campaigns with warnings to Thailand, not to the terrorists working for Thaksin, but to the government to act carefully so as to not provoke the “red shirts.”
{openx:49}

The ICG report goes on to claim that the political turmoil is between the Thai establisment, including the military, the monarchy, and the judiciary verses Thaksin. It concludes that the elections, regardless of whether they are fair and free, will be unsatisfactory to Thaksin and his red mob if they are not the winners.

When considering who is backing Thaksin, it would be more accurate to state that it is really a power struggle between Thailand as a nation and the foreign-backed billionaire Thaksin Shinwatra, who now resides in Dubai and regularly phones into the “red shirt rallies.” His last phone-in was just on April 10, 2011, to commemorate the bloodbath they themselves instigated last April 10. He has also announced that his own sister, Yingluck Shinawatra, will be running for PM in the upcoming elections. Thaksin’s brother-in-law Somchai Wongsawat had also been PM temporarily until he was dislodged from power. When asking why Thaksin himself will not run, it is because he has been tried, convicted and sentenced to two years in prison for corruption – charges from which has fled abroad to escape. It will be difficult for even the ICG and its army of media pundits to spin this as anything but an illegitimate nepotistic dictator clawing his way back into power with an army of duped farmers, lied to and exploited – and quite literally indoctrinated in political education camps. 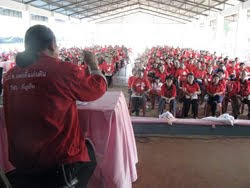 Political indoctrination camps are being use to teach impressionable

rural folks the tenants of “democracy” as told by cleptocratic, globalist-
backed Thaksin Shinawatra. The school is led by Maoist, Weng Tojirakarn.

While the ICG and the corporate interests it represents are intent on continuing to meddle in Thailand’s affairs and attempting to lend credibility to a political faction lead by a man one of ICG’s own trustees had lobbied for and who they themselves admit is engaged in at least “amateurish” terrorism, it is uncertain how their ambitions toward Thailand will manifest themselves. A repeat of the 2009 and 2010 bloody street demonstrations was averted this year through the government’s calling for elections, releasing Thaksin’s red mob leaders on bail, and a suspiciously convenient border skirmish with Cambodia that stole the headlines away from the red shirt leaders.

However, considering events unfolding in Libya, where a militant uprising by Al Qaeda, armed and backed by the West was reinvented as a humanitarian crisis necessitating foreign military intervention, and a similar conflicts developing in Syria and in the Ivory Coast, anything at all is possible.


grenade launchers into the riot troops. Violent crossfire ensues. Red shirt
security adviser “Seh Daeng” would go on to admit 300 armed men were
under his command in the Australian newspaper “The Age.”
Greater Implications

Last year in Bangkok, beginning in April, 2010 the red shirt leaders had mobilized an estimated 300 mercenaries carrying M-79 grenade launchers and a variety of assault rifles. The bloodbath and arson that ensued until late May has now been entirely pinned on the Thai government by both the red shirts as they attempt to rewrite history and the foreign media who is purposefully obfuscating the events that transpired starting April 10 onward. Now, similar “mystery gunmen” have turned up in Yemen, sniping protesters from rooftops, in Syria gunning down protesters and police alike, and of course the not-so-mysterious gunmen that have been leading the uprising in Libya since it started on February 17, 2011.
Indeed, this is not an “Arab Spring,” this is a global blitzkrieg extending from the Middle East through the bordering nations of Russia, across China’s “String of Pearls” (including Bangkok) and to Beijing itself.

With Hilary Clinton and the US State Department now admitting to funding subversion worldwide, along with organizations like the National Endowment for Democracy on record supporting NGOs and “independent media” throughout these targeted regions, we are looking at a covert war for world domination. With blood flowing sporadically from nation to nation as the foreign-backed revolutionaries make their bids to unseat standing governments, war has all but been declared. China has even recently gone as far as responding to this increasingly apparent fact, telling the United States to stop using the issue of human rights reports to interfere in other countries’ internal affairs. Such “reports” come from entirely corporate-funded, disingenuous organizations, and have just recently allowed the West to bring war upon Libya at the cost of truly abhorrent humanitarian crises.

We are already in the middle of World War III – with the winners being either a Wall Street-London centric unipolar global government, or a multi-polar world where nations, just as people, need to barter, trade, and compromise for what they want while respecting the property and the sovereignty of one another. In order to ensure the unwarranted influence wielded by corporate interests is ended, we must begin to boycott and replace them in our everyday lives. As this is war, it will not be won overnight, it will be difficult, replete with danger, failure, but eventually success. Our only other choice is to bend to the will of these antiquated, blood thirsty unyielding tyrants that have mismanaged our respective nations into a mired web of interdependency and crippling economic disparity.

From Thailand to Europe and even in the United States there is a backlash against globalization taking place on a local level – at your local farmer’s market and through innovative collaborative projects developing and sharing technological knowledge and progress. While security forces fight on the streets with contrived revolutions, we must ceaselessly work to undermine the corporations and financial interests that are truly powering this chaos.

Tony Cartalucci’s articles have appeared on many alternative media websites, including his own at
Land Destroyer Report.