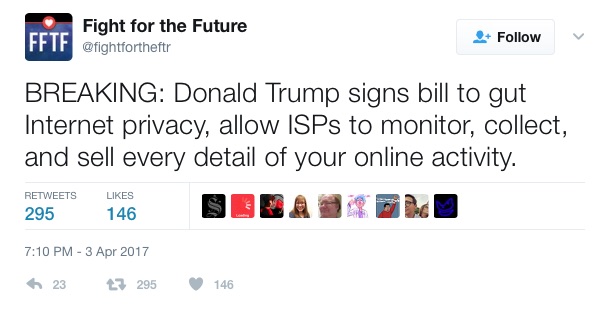 WASHINGTON, D.C. – The Soros-funded Fight for the Future (FFTF) is leading the charge to demonize President Trump over signing legislation to cancel the FCC’s Internet privacy rule.

FFTF’s Campaign Director, Evan Greer, is an LGBT activist with an extensive radical past, including working to free a convicted terrorist before joining FFTF.

“Fight for the Future is a non-profit organization founded in 2011 whose mission is to ensure that the web continues to hold freedom of expression and creativity at its core,” the group proclaims on its website. “We seek to expand the internet’s transformative power for good, to preserve and enhance its capacity to enrich and empower.”

“We envision a world where everyone can access the internet affordably, free of interference or censorship and with full privacy.”

How possibly could anyone disagree?

The group’s history demonstrates that FFTF is arguably the most radical of the non-profits joining Google under the Orwellian guise of “Internet freedom” and “civil liberties” to achieve exactly the opposite – more government control of the Internet.

Funded by Open Internet Defense Fund, a project of George Soros’ Media Democracy Fund, FFTF joins Google in the fight to preserve the Obama administration’s effort to have the FCC regulate the Internet under Title II “common carrier” rules that resulted both the net neutrality and Internet privacy rules the Trump administration is seeking to overturn.

What FFTF seeks to hide by the group’s professed support for free expression is the group’s ideological ties to Internet giant Google and Google’s campaign to censor conservative websites including Infowars.com as “Fake News.”

As Infowars.com has previously reported, Google’s interest in privacy rules for ISPs and broadband providers should be self-evident: The draconian privacy rules only apply to Google’s competitors in the broadband industry, leaving Google – arguably the world’s worst violator of online privacy – virtually unscathed.

On the group’s website, FFTF brags that in 2012, “we organized the largest online protest in history, an Internet-wide strike against web censorship which defeated the SOPA and PIPA bills.”

FFTF also bragged it organized a “Battle for the Net” campaign that drove “nearly four million people to contact the FCC resulting in the game-changing passage of net neutrality rules,” that the group described as a “First Amendment” for the Internet.

In 2014, FFTF co-founder Holmes Wilson sent an email to FFTF subscribers urging support for President Obama’s statement on Nov. 10, 2014, calling for “the strongest possible rules to protect” the Internet, encouraging the FCC to adopt net neutrality to insure the future of an “open” Internet.

Wilson’s emails made the following points:

More recently, FFTF launched a new initiative in March 2017 to provide $15,000 per month to activists who quit their jobs to join “A Teams” to fight President Trump’s public policy agenda.

FFTF launched the program with an eye-catching promotion: “Terrified about Trump? Quit your job, start an A-Team. We’ll fund it.”

“We’re currently taking applications for an initial launch of the project, and will be providing a few select teams with funding, guidance, and support,” said Evan Greer, speaking to reporters in her capacity as FFTF campaign director.

“Our goal is to spawn a movement of small, dedicated, groups of people using the tactics that we’ve used effectively to defend Internet freedom to win major victories in other issue areas affecting our basic rights and freedoms, such as immigration, freedom of press, police brutality, drug reform, and government corruption.”

Starting Monday, April 3, 2017, Evan Greer was the contact person for the FFTF press release blasting President Trump for signing SR Res 34, a bill the FFTF characterized as slashing “the FCC’s Internet Privacy rules and allow Internet Service Providers like Comcast, Verizon, and AT&T to monitor, collect, and sell the details of their customers Internet activity to advertisers.”

On her Tweet account, Greer has posted a series of tweets, on a similar theme, attacking Trump for signing a GOP-sponsored bill that rescinded the FCC “Internet Privacy” rules that prevented ISPs from collecting customer web-browsing data, without disclosing that ISPs rarely have access to this type of data, while the FCC rule did nothing from preventing Internet giants like Google from continuing their extensive web-browsing customer data mining operations.

In another Tweet, dated April 4, 2017, Greer bragged the Washington Post had quoted her attacking Trump for selling out to “CEOs and lobbyists for giant telecom companies, who want to rake in money by spying on all of us and selling the details of our lives to marketing companies.” 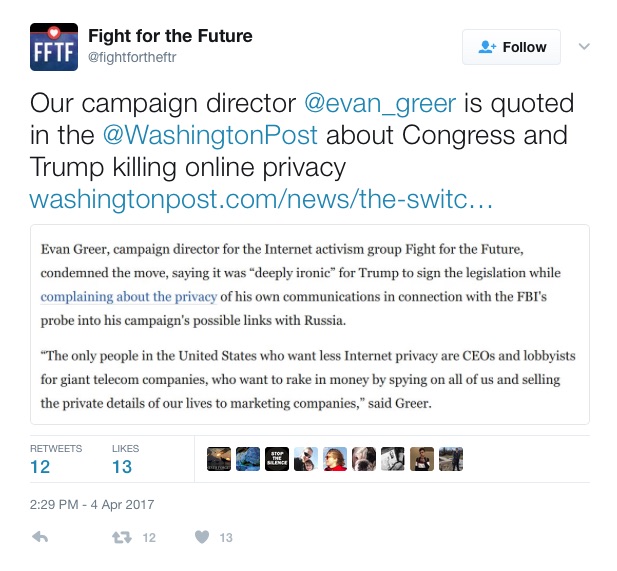 Greer’s Linkedin.com account lists that from November 2009 to April 2012, she worked as media strategy and outreach coordinator for the Tarek Mehanna Support Committee.

Tarek Mehanna is currently serving a 17 ½ year sentence in a federal prison in Illinois after he was convicted in federal court in Boston in 2012 of four terror-related charges of conspiring to provide material support to terrorists, conspiring to kill in a foreign country, and lying to authorities in a terrorism investigation – a case in which the U.S. Supreme Court declined to hear an appeal.