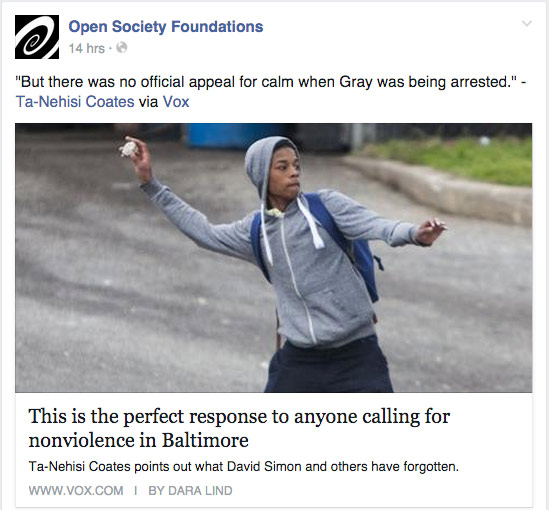 This is the perfect response to anyone calling for nonviolence in Baltimore http://t.co/XRZjjSLCfN pic.twitter.com/d57iLszUGV

The article highlights a story from The Atlantic’s Ta-Nehisi Coates, in which the author argues that protestor violence is an apt response to the violence perpetrated by police on residents of Baltimore throughout the years.

When nonviolence is preached by the representatives of the state, while the state doles out heaps of violence to its citizens, it reveals itself to be a con. And none of this can mean that rioting or violence is “correct” or “wise,” any more than a forest fire can be “correct” or “wise.” Wisdom isn’t the point tonight. Disrespect is. In this case, disrespect for the hollow law and failed order that so regularly disrespects the community.

In the wake of the destruction, other leftist publications such as Salon also got on the violence-against-police bandwagon, running a headline that reads, “Baltimore’s violent protesters are right: Smashing police cars is a legitimate political strategy,” which called non-violence a sometimes “futile tactic.”

The issue of police brutality, as in anywhere else in America or the world for that matter, is a problem in Baltimore. The city has paid out close to $5.7 million since 2011 to victims of police violence.

But the only logical response to riots, looting and destruction of private property is a more heavy-handed police crackdown, manifested in Maryland Gov. Larry Hogan’s recent decision to deploy the National Guard.

The Soros group knows this, and its social media sendouts illustrate how the foundation deliberately pours gas on the flames of civil unrest in order to “advance systemic change,” hoping to bring about their version of order out of chaos.

The Open Society Foundations, chaired and founded by Soros, was found to have contributed at least $33 million towards emboldening activists in Ferguson, Missouri, helping make the flawed “Hands up, don’t shoot” mantra ubiquitous.

Soros himself also admitted on CNN last year that a non-governmental organization he set up in Ukraine prior to its conflict with Russia “played an important part” in fomenting the events that destabilized the region.

While police violence on citizens of Baltimore is in no way justifiable, violent protests and attacks on police will merely serve to increase police forces and justify a militarized response.

Following their social media post, the Society had to “clarify” its position to a concerned Facebook user, claiming, “we’re not criticizing the call for calm nor are we condoning violence. We’re sharing this story since it draws attention back to police violence and brutality.”