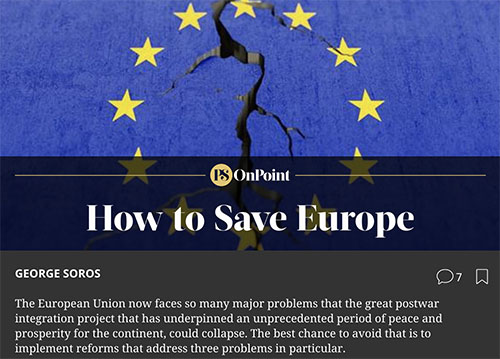 Billionaire globalist George Soros unveiled his plans to “reinvent” the EU, even though he is responsible for most of the crises currently plaguing Europe.

“The EU faces three pressing problems: the refugee crisis; the austerity policy that has hindered Europe’s economic development; and territorial disintegration, as exemplified by Brexit,” he wrote in a Project Syndicate op-ed on Tuesday.

Soros spoke of “voluntary” cooperation from EU states to take in migrants, but then immediately contradicted himself by saying it wasn’t “realistic” to keep their borders closed to them.

“The EU must protect its external borders but keep them open for lawful migrants. Member states, in turn, must not close their internal borders,” he said.

“The idea of a ‘fortress Europe’ closed to political refugees and economic migrants not only violates European and international law; it is also totally unrealistic.”

“Indeed, the whole of Europe has been disrupted by the refugee crisis,” he added. “Unscrupulous leaders have exploited it even in countries that have accepted hardly any refugees. In Hungary, Prime Minister Viktor Orbán based his re-election campaign on falsely accusing me of planning to flood Europe, Hungary included, with Muslim refugees.”

Falsely accused? Soros openly admitted his desire to unleash millions of economic migrants into Europe in 2015, right at the beginning of the crisis.

He even earmarked $500 million to pro-migrant NGO’s, including ones that helped ferry migrants into Europe from the Mediterranean.

Next, Soros says the way to tackle the migrant and debt crisis is with more debt, by creating a “Marshall Plan for Africa,” which would see the EU hand over $36 billion a year to Africa to facilitate a more “orderly [migration] process,” that helps “meet their economic needs.”

He even admitted that running up the debt would create more austerity — which he just said was a crisis in Europe.

“The EU has a high credit rating, and its borrowing capacity is largely unused,” Soros said. “When should that capacity be put to use if not in an existential crisis? Historically, national debt always grew in times of war. Admittedly, adding to the national debt runs counter to the prevailing orthodoxy that advocates austerity; but austerity is itself a contributing factor to the crisis in which Europe finds itself.”

Finally, despite the British people’s clear vote in favor of Brexit, the decision to leave the EU must still be challenged before Brexit is finalized because the EU needs England’s money, Soros said.

“That is the goal of an initiative called Best for Britain, which I support,” he said. “This initiative fought for, and helped to win, a meaningful parliamentary vote on a measure that includes the option of not leaving before Brexit is finalized.”

“Britain would render Europe a great service by rescinding Brexit and not creating a hard-to-fill hole in the European budget.”

The Nazi collaborator lamented that his vision of a globalist-run European Union began to fall apart after the financial crisis of 2008 — which globalists like him were ultimately responsible for.

“I personally regarded the EU as the embodiment of the idea of the open society. It was a voluntary association of equal states that banded together and sacrificed part of their sovereignty for the common good.”

Fortunately, patriots in Europe are waking up to the EU’s tyranny, and several EU states like Poland, Italy and Hungary have resisted its dictates.

Orban has even permanently expelled the Open Society Foundation from Hungary to prevent Soros from meddling in its domestic affairs.