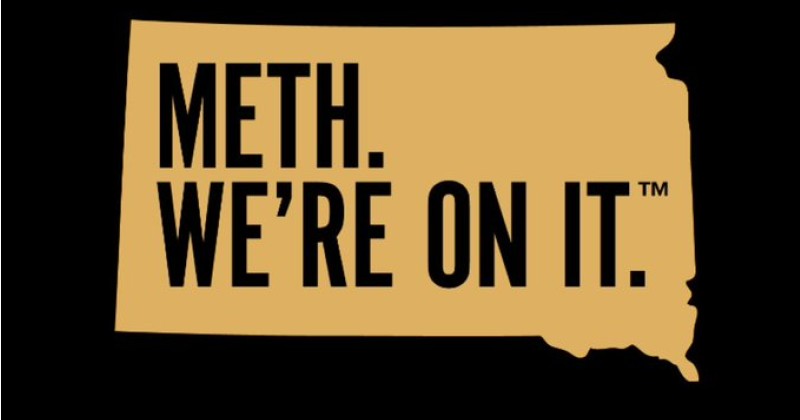 South Dakota’s Department of Social Services has spent nearly half a million dollars on an anti-meth ad campaign with the tagline “Meth. We’re On It.”

No, this is not The Onion.

“The campaign’s motto features the phrase, “Meth. We’re on it,” over an outline of South Dakota, and the ad and posters feature people of differing in ages and races saying, “I’m on meth,” reports the Argus Leader.

A video shows Governor Kristi Noem telling the camera, “I’m on meth,” before she explains that “on it” means “on the case of meth.”

If you're having a rough day, just remember you're not the governor of the state of South Dakota. The state launched a new campaign called "ONmeth" about battling meth addiction and apparently the tagline is "Meth. We're on it." pic.twitter.com/Gx72LSEIxa

TV ads, posters, billboards and a website will feature the motto at a cost of $449,000 that was paid to Broadhead Co., a marketing and ad agency in Minneapolis.

The outlay compares with $1 million which has been set aside for meth treatment services and more than $730,000 for school-based meth prevention programming.

South Dakota taxpayers paid $450k for a new anti-meth PSA campaign. And here's what the state came up with https://t.co/1MATJPBULv pic.twitter.com/bsZKkXCPNL

Social Services Secretary Laurie Gill called the campaign “inclusive and empowering,” but respondents on Twitter were not so enthusiastic.

“Apparently no one thought this through,” commented one.

“It’s so bad and I know it’s a serious issue but WHO APPROVED THIS?” asked another.

One respondent said they were aware that the tagline was meant to apply to meth addicts being refreshingly honest, “But having a clip of your governor saying I’m on meth is not exactly genius marketing.”