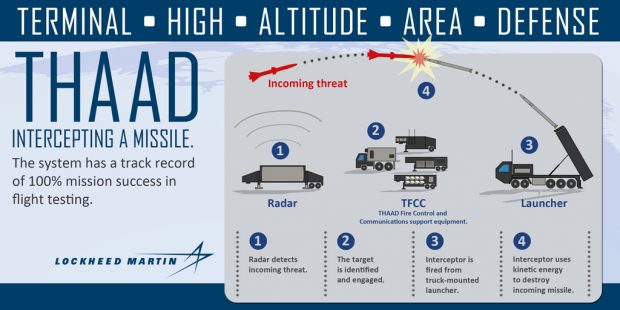 South Korea has suspended the deployment of a US missile defense system intended to protect the country from North Korea.

The decision, made by South Korea’s newly elected president Moon Jae-in, was confirmed by a senior official in Seoul Wednesday who stated that although two previously-installed launchers of the Terminal High Altitude Area Defense (THAAD) system would remain, four others would not be deployed until an environmental impact assessment was completed.

“We won’t do anything to (the two launchers) already deployed, but when it comes to the additional deployment (of four launchers), we have to wait for the environmental impact assessment,” the official said.

The THAAD system is designed to locate and destroy short and medium-range missiles as they enter the final stages of flight.

The controversial missile shield has both spurred tensions internally and been vehemently opposed by China. Fearing the powerful radar system puts them at a military disadvantage, Beijing has placed economic sanctions on Seoul by targeting South Korean companies in China while stifling Chinese tourism.

“China’s stance of opposing the THAAD deployment by the U.S. in [South Korea] is clear, consistent and firm,” a spokesperson for the Chinese Foreign Ministry recently said.

Moon repeatedly criticized during his campaign then-President Park Geun-hye for rushing to deploy THAAD prior to the election in an attempt to make the system’s removal more difficult.

Although THAAD was not intended to be fully operational until the end of 2017, the environmental assessment could delay the now uncertain deployment for an additional year.

Commander Gary Ross, a Pentagon spokesman, told South Korea’s Yonhap News Agency that the US is hopeful that THAAD will still be deployed in accordance with the original agreement.

“The U.S. trusts the ROK official stance that the THAAD deployment was an Alliance decision and it will not be reversed,” Ross said. “We will continue to work closely with the ROK Government throughout this process.”