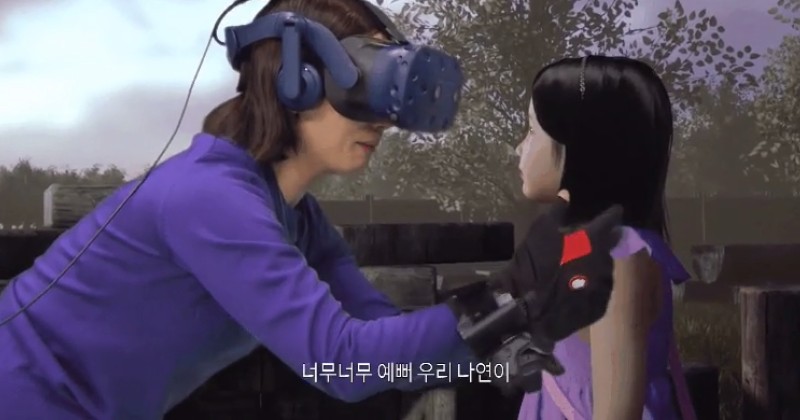 A TV show in South Korea reunited a mother with her deceased 7-year-old daughter via a virtual reality recreation in what some observers thought was a dystopian and exploitative move.

A clip from the show Meeting You features the mother, wearing a VR headset and touch-sensitive gloves, walking around a green screen set and interacting with a 3D representation of her daughter.

The two are able to engage in a limited form of conversation as the mother caresses the representation of her daughter while crying.

The situation is similar in some ways to a plot from the popular dystopian TV series Black Mirror.

In an episode entitled Be Right Back, a young woman’s boyfriend is killed in a car accident and she decides to replace him with an android clone by having her boyfriend’s AI personality downloaded into the robot’s body.

While this woman’s VR interaction with a graphical representation of her dead daughter is a long way off that, it’s almost as creepy.

As Kotaku’s Luke Plunkett points out, no one would have an issue with it if the interaction helped the mother get over her grief, but the fact that the whole thing is being broadcast for the consumption of TV viewers makes it somewhat suspect.

“Having some code pretend to be a living thing that she loved might only add to the trauma. Only time, and research, will tell,” comments Plunkett, adding, “Whatever the long-term moral and ethical questions are that we’re going to have to face, this is extremely fucked up.”