A company is aiming to take advantage of the mindless celebrity worship culture by planning to feed fanatics their favorite celebrities. 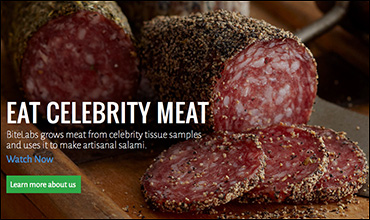 Hundreds of people are petitioning celebrities to donate tissue samples to BiteLabs.org, a company that says it will produce “artisanal salami” from celebrity tissue samples for human consumption.

“How do you connect with celebrities?” a video promo for BiteLabs asks. “TV? Over the Internet? At Concerts? BiteLabs gets you so much closer. We take celebrity cells, grow them into muscles, making robust, flavorful, healthy, eco-friendly artisanal salami. We bring you celebrity meat.”

“Here’s how it will work,” explains the Los Angeles Times. “A sample of tissue containing myosatellite cells (the type of cells that help repair and regrow damaged muscle) will be taken from a person during a biopsy. Those cells are multiplied in a lab using a medium that acts as an artificial blood to grow muscle.”

The company already has a few celebrities in mind, such as James Franco, Jennifer Lawrence, Kanye West and Ellen DeGeneres, and even recipes they believe complement their personalities.

The end result, BiteLabs testifies, is a “high-quality, luxury protein, in a sustainable manner that eliminates the environmental and ethical concerns associated with traditional livestock production.”

Hungry yet? Maybe their promo vid will entice you..

While eating human muscle tissue may sound cannibalistic, BiteLabs claims its meat will be free of “animal cruelty, waste and from the environmental impacts of industrial farming,” and that it is simply fulfilling the next step in food evolution.

“In 1931, Winston Churchill predicted a future in which all the world’s meat would be grown in labs; what, he asked, was the sense in raising a whole chicken merely for the sake of its wings or breast meat?.. Today, In-Vitro meat production is close to becoming a reality..”

While BiteLabs’ idea is indeed disgusting, and possibly a well-coordinated hoax, increasingly more horrific ingredients are really being used to produce foods.

Last month, scientists in Spain found “The trick to making sausage healthier may be baby poop.”

“Bacteria from baby poop can help make delicious sausages, which could transform savory meats into health foods much like probiotic yogurts, according to new research,” reported Live Science.

And in 2011, Japanese scientists announced their success in turning human excrement into an edible meat-like texture.

“According to the latest reports, some people who actually ate the ‘turd burger’ have said it tastes like beef,” the International Business Times reported.

Or if none of the above strikes your fancy, how about a tasty cricket protein bar?

It’s evident a Brave New World of food is here, but there will always be detractors who will resist eating people and poop.

Watch: Alex Jones eats a mealworm pizza at the rodeo to appease the United Nations, whose researchers recommend insects as a source of protein.