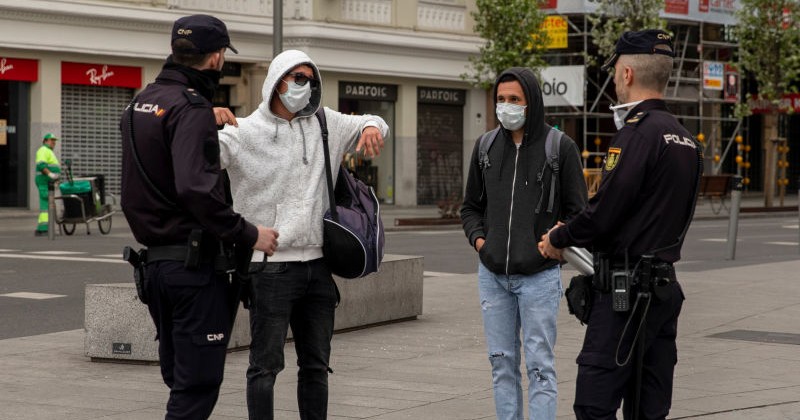 Amidst an investigation into the question of whether Spain’s draconian lockdown laws are constitutional, people are being fined a whopping €2,000 euros for “disrespecting” a police officer.

Unlike other European countries, people in Spain aren’t even allowed to go out to exercise during the coronavirus quarantine.

Citizens are only allowed to visit their nearest grocery store and only one person can be in a vehicle at a time unless the other person is classed as “vulnerable” or there is a medical emergency.

The lockdown is enforced via a network of roadblocks at which drivers are quizzed as to their intentions by aggressive police, some of whom carry guns. A physiotherapist was hit with a €600 euro fine for going to see a client after police stopped him when he was driving home.

The €2,000 euro fine for “disrespecting” a police officer is obviously completely arbitrary and easily open to abuse as a form of revenue generation.

“The guidelines state a standard €601 penalty for unauthorized movement outside the home without good reason that can be increased to up to €2000 if the offender responds with an “inappropriate attitude” to law enforcement officers, reports the Local.

People who cannot provide identification to police are fined €700 euros, while a trip to a second home earns a €1500 euro fine. The biggest fine – a gargantuan €10,400 euros – is reserved for anyone who attempts to “to organize or participate in a gathering, party or celebration.”

According to journalist Jason O’Toole, who is locked down in Madrid, tensions are “running high” and people are now being arrested for going out “too frequently” to the grocery shop.

This has prompted some judges, solicitors, law professors, and NGOs to complain that the onerous fines are “unconstitutional.”

“There’s an investigation now underway by the Defensor del Pueblo (Spanish Ombudsman) to see if the fines are “correct and proportional,” because they want to “protect the rights of the citizens.” It’s a move that has even been welcomed by La Abogacia del Estado,” writes O’Toole.

“The Ministry of Justice is now questioning whether the fines are legally sound and says it’s possible many cases could be thrown out of court on a technicality. They say, for example, those apprehended might get off scot-free if the police didn’t first give them a formal warning – like a yellow card in football.”