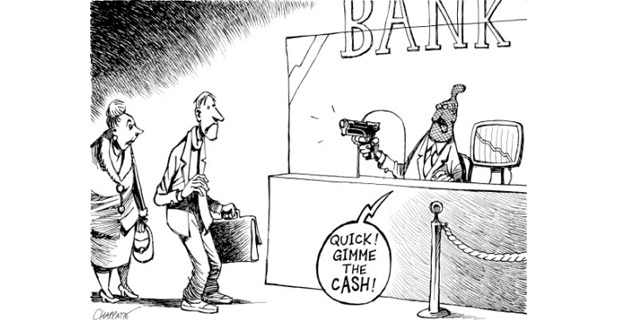 It was a little over a year ago, just as the Cyprus deposit confiscation aka “bail in” was taking place, when we asked, rhetorically, if “Spain is preparing for its own deposit levy” when an announcement by Spain’s Finance Minister, Montoro, hinted at the imminent arrival of just that.

While Spain’s economy minister Luis De Guindos proclaimed in the Senate today that bank deposits under EUR100,000 are “sacred”and that “Spanish savers should stay calm,” Spain, it would appear, has changed constitutional rules to enable a so-called ‘moderate’ levy on deposits – as under previous Spanish law this was prohibited. For now, they claim the ‘levy’ will be “not much higher than 0%” and is mainly aimed at regions in Spain that have “made no effort to collect taxes” based on new revenue expectations.

As El Pais reports, the minister of finance and public administration, Cristobal Montoro, defends the need for such a ‘levy’ in their constitution on the basis of standardizing taxes across regions (and is preparing a proposal on the amounts to be paid) and although it would appear that while the European Commission could previously argue that such a ‘tax’ would violate the free movement of capital in Europe, it now leaves the door open to eventually effectively taxing the deposits.

Of course, back in March 2013 imposing such a tax would immediately bring up images of parallel bank runs in Cyprus and visions of confiscated deposits, culminating in an immediate collapse of the otherwise already insolvent Spanish banking system. In other words, the timing picked by Montoro to reveal what was coming couldn’t have been worse.

Now, however, things are different.

Not only is Europe supposedly recovering, not only is the Cyprus bail in a distant memory (until it comes back front and center with a bang), but it was only a few weeks ago when the ECB – desperate to crush the same EURUSD which just two years ago seemed would implode under the weight of Europe’s artificial political and monetary union – revealed NIRP, aka ZIRP on steroids: a negative deposit rate.

Or, as Spain may have called it, a tax on deposits. Because some 16 months after it was first hinted, its time has finally come, and as Bloomberg reported a few hours ago:

The details are along the lines of what is already known:

Or just as El Pais reported over a year ago:

The Minister of Finance and Public Administration, Cristobal Montoro, has advanced on Tuesday that the government will impose a type “moderate” to bank deposits to compensate communities that saw their tax autonomy canceled after the Executive created a state tax 0% rate.  This tax on bank deposits, which has nothing to do with Cyprus, does not affect savers but requires credit institutions to pay for that capture deposits.

“The autonomous communities receive timely and therefore financially compensation shall implement a moderate rate in the state tax on bank deposits,” said the minister, adding that this kind “will not be much higher than 0%” .

The Minister of Finance has clarified that such “moderate” will have no tax collection effort, “but that these regions serve to offset the revenue loss to see.”  So, he assured that the amount will correspond to the amount “exact has been undermined by the cancellation of regional taxes”.

The Government announced in November 2012 the creation of a tax on bank deposits with type 0%, with implementation on 1 January 2013, to prevent the regions implement your own.  A week earlier, the Constitutional Court had endorsed the tax on deposits of Extremadura, which launched in 2001 and turned in the day the government of José María Aznar.

Thus, this tax was in force before the imposition of the 0% and in the case of Andalusia, the Canary Islands in 2010 and established, who created it in June 2012.  Only after it established Asturias.  So this type Montoro 0% justified by the need to standardize the tax system and maintain the unity of the internal market, after the European Commission will send a letter to the Government on the grounds that these taxes in the regions could violate the free movement of capital.  While leaving the door open to eventually effectively taxing the deposits.

In other words, the funding of the Spanish regions is now in the hands of those dumb enough to work hard and save their money. Because it is only “fair” that they – not the banks that year after year are bailed out by the ECB – end up with the short stick.

But please don’t be surprised: after all as we said on June 5 when Draghi revealed that “NIRP Has Arrived” when we said that “Europe Officially Enters The “Monetary Twilight Zone.” It is all downhill from here.

And yes: coming to an insolvent country near you… everywhere.