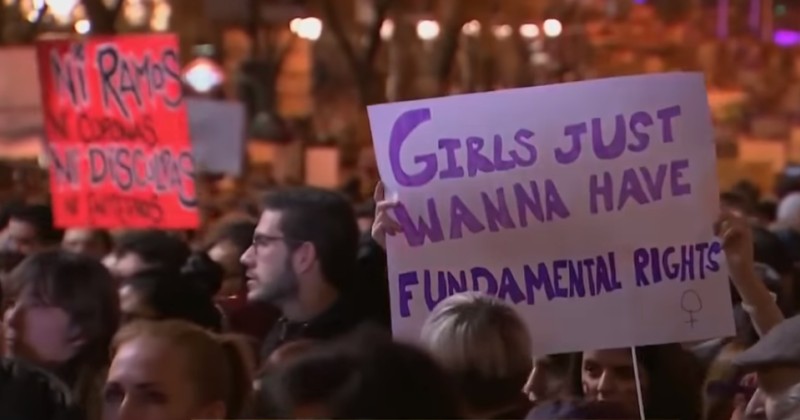 The Spanish government is being sued for gross negligence after it encouraged citizens to attend giant feminist rallies across the country on March 8, potentially exposing hundreds of thousands of people to coronavirus.

“A class action lawsuit filed on March 19 accuses the Spanish government — highly ideological by any standard, as the Communist coalition partner, Podemos, was founded with seed money from the Venezuelan government — of knowingly endangering public safety by encouraging the public to participate in more than 75 feminist marches, held across Spain on March 8, to mark International Women’s Day,” writes Soeren Kern.

In Madrid alone, which has been devastated by the coronavirus outbreak, “Thousands of women marched…against gender inequality to mark International Women’s Day, despite concerns the gatherings could help the spread of coronavirus,” reported Reuters.

According to journalist Matthew Bennett, in an apparent effort to downplay the danger of attending the rallies to the public, the Spanish government failed to report new coronavirus cases between March 6 and March 9.

Despite numerous warnings and the government having already ordered major football and basketball matches to be held behind closed doors with no spectators, the Spanish government’s main point man for the coronavirus, Fernando Simón, told the public there was no risk.

“If my son asks me if he can go, I will tell him to do whatever he wants,” said Simón.

One protester at the march even held a sign that said, “Machismo kills more than coronavirus.”

“The lawsuit, involving more than 5,000 plaintiffs, accuses Spanish Prime Minister Pedro Sánchez and his representatives in Spain’s 17 autonomous regions of “prevarication” — a Spanish legal term that means lying and deceiving,” writes Kern. “The government was allegedly so determined to ensure that the feminist marches took place on March 8 that it deliberately downplayed warnings about the pandemic.”

If found guilty, officials will face a penalty of between nine to 15 years of disqualification from public office.

“The result of the calls for these demonstrations and their direct approval by government delegations and by the inaction of the central government chaired by the accused, Prime Minister Pedro Sánchez, could not be more antagonistic to what the EU indicated in its report. Why was not an order issued to prevent any type of mass event?” asked Víctor Valladares, a Madrid-based lawyer who is leading the lawsuit.

The Spanish government’s culpability for exposing its own citizens to coronavirus in the name of ‘woke’ activism has been almost completely ignored by the western media, despite there being much reporting about a Champions League soccer game in Milan, Italy on February 19th which was attended by 40,000 residents of Bergamo and has been described as a “biological bomb” during which “the virus was widely spread” according to Mayor Giorgio Gori.

As we document in the video below, it wasn’t just in Spain that political leaders were urging citizens to attend huge rallies and parades right as COVID-19 hit hard.

In Italy, the left-wing Mayor of Florence and leftist activist groups urged Italians to hug Chinese people in the street, despite thousands of Chinese migrant workers in northern Italy having potentially been exposed to COVID-19.