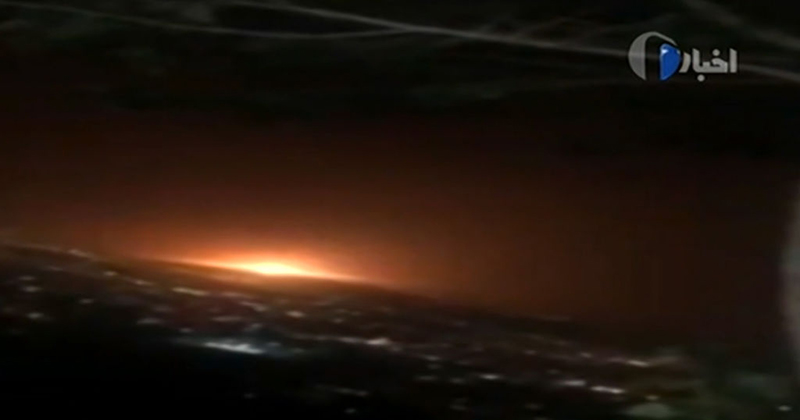 Iran has made no secret in the last months of desiring to blow past Iranian enrichment caps set in place by the 2015 JCPOA. Top officials previously boasted of doing just that, so it’s no mystery.

What is a mystery, however, is the latest increased number of “random” explosions and fires at remote Iranian countryside areas known for being weapons and nuclear development sites.

For example last week a massive explosion was observed lighting up the midnight sky outside Tehran, caught on film by local residents, which Iran’s military dismissed as a gas leak explosion incident. But it was later revealed to have occurred at a ballistic missile development facility.

And just days ago, another reported “accident” occurred at Natanz nuclear complex. But that particular ‘mystery’ blast caused Iranian officials to lash out in anger Thursday, saying “hostile countries” like the US and Israel are near the point of crossing “red lines”. Crucially, Iran also said there were no radioactive leaks as a result of the incident.

Iran’s Atomic Energy Organization ultimately denied that nuclear material was even present in the building.

Last week a similarly mysterious blast took out large parts of an Iranian military site outside of Tehran:

Adding to the suspense of what could be behind these latest ‘accidental blasts’ an anonymous Middle Eastern intelligence official asserted that the Natanz facility was targeted with a bomb planted there.

“The blast was caused by an explosive device planted inside the facility,” the official told The New York Times. The official added that the bombing “destroyed much of the aboveground parts of the facility where new centrifuges… are balanced before they are put into operation.”

Reports out of Iran’s state media also suggest a possible cyber-attack, to which Tehran military officials say “they’ll respond” if the attack did indeed originate from Iran’s enemies.

Interestingly, the NY Times went so far as to raise the question (even if in the form of doubts) of whether US-Israeli black ops targeting Iran, which go back to the start of Bush’s so-called ‘war on terror’, could explain the rise in deeply suspicious and unexplained blasts and fires:

The timing was suspicious: A series of unexplained fires have broken out in recent days at other facilities related to the nuclear program. Still, experts noted that if the explosion was deliberately set, it showed none of the stealth and secrecy surrounding the complex cyberattacks by the United States and Israel that were first ordered by President George W. Bush toward the end of his term, and then extended by President Barack Obama.

The Persian language service of the BBC reported that several members of its staff received an email from a previously unknown group, which referred to itself as the Homeland Cheetahs, before news of the fire became public. The group claimed responsibility and said it was composed of dissidents in Iran’s military and security apparatus. They said the attack would target aboveground sections of the targeted facilities so that the Iranian government could not cover up the damage.

The US State Department, meanwhile, has said it is “monitoring reports of a fire at an Iranian nuclear facility.” It added: “This incident serves as another reminder of how the Iranian regime continues to prioritize its misguided nuclear program to the detriment of the Iranian people’s needs.”

Is either Israeli or US intelligence behind this? Tel Aviv has for months vowed it would stop at nothing to prevent the Islamic Republic from achieving nuclear weapons capabilities.

Such a possible sabotage campaign would indeed be a natural first step, as an ‘alternative’ to preemptive strike or an all-out war scenario (also reported to be “on the table” in Netanyahu and defense ministry national security discussions).