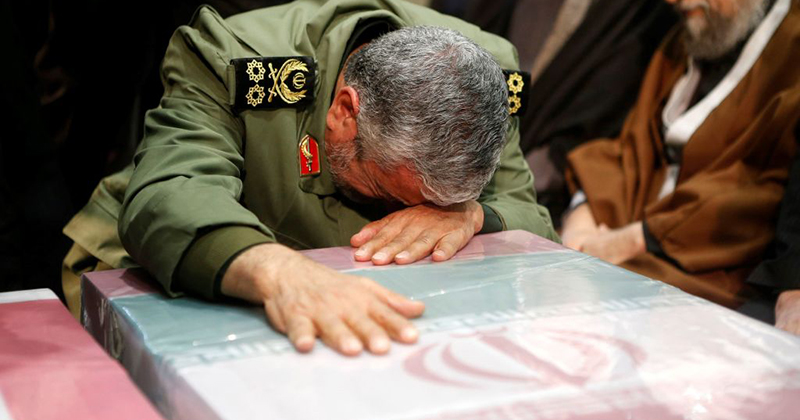 A speaker on Iranian state television during the funeral of Iranian terror chief Qasem Soleimani on Sunday attempted to offer an $80 million bounty for President Donald Trump – but told the audience 80 million Muslims each had to pitch in $1 to cover the cost.

Iran is home to an estimated 80 million people.

The speaker appeared to be making the inspirational point that, together, Iranians could do anything, including prompt the assassination of the President of the United States.

London-based Iranian opposition journalist M. Hanif Jazayeri first circulated the clip with English subtitles on Twitter, which appeared to air on live coverage of the funeral in Iran.

The Iranian regime controls all information legally broadcast in the country.

OMG! Iran's regime just announced an $80 million bounty for anyone who brings the head of @realDonaldTrump for killing Soleimani.
PS: Iran's ppl however are overjoyed at Soleimani's death. As the #IranProtests have shown, they long for an end to the mullahs' tyranny #FreeIran2020 pic.twitter.com/uB3zOG5EKA

“If everyone anywhere in the world supports our initiative in Mashhad, on behalf of all of Iran’s people — 80 million Iranians — and each puts aside $1 US, it would equal $80 million,” the man is heard saying over footage of funeral events.

The man, offering a eulogy, continued:

Short on time, but still want to stay informed? The War Room Countdown covers clips from all 3 hours of the broadcast!