Speaker of the House John Boehner is experiencing a backlash after he posted the image below on his Facebook page. The image is intended to be a sharp retort to Obama’s declaration that he will rule by imperial fiat. The posted image, however, is little more than empty rhetoric considering the behavior of establishment Republicans who refuse to seriously confront Obama’s constitutional violations. 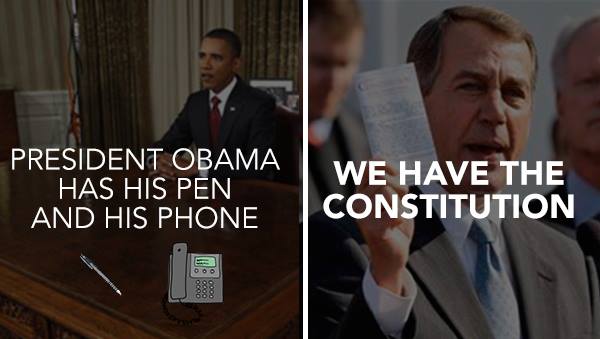 Boehner and establishment Republicans cannot easily portray themselves as defenders of the Constitution. A large number of commenters on the popular social media network told them as much.

Thousands of comments took Boehner and Republicans to task for not moving to impeach Obama. Others defended Obama and accused Boehner and the Republicans of obstructionism.

“Quit acting like you are going to do anything remotely close to following your Oath of Office!” said one commenter. The remark is a reference to Article VI, clause 3 that requires Senators and Representatives take an oath of office to support the Constitution.

“Dear Mr. Speaker, If you believed in the Constitution or even read it, you would start impeachment proceedings against the president. But you won’t, you are much too weak a leader to do the right thing,” another commenter complained about Republican lack of resolve.

Fear of even mentioning the “I” word demonstrates just how trepidatious Republicans are when it comes to penalizing Obama for his crimes. During a Committee on the Judiciary meeting in December, Republicans were so adverse to the subject they didn’t even mention the word impeachment. “They didn’t use that word, of course. Republican leaders frown on such labeling because it makes the House majority look, well, crazy,” Dana Milbank wrote for the Washington Post.

“They’ve failed at cutting off funding, they’ve had difficulty suing Obama in court and they lost the 2012 election. That basically leaves them with the option of making loud but ineffectual noises about high crimes and misdemeanors,” Milbank, who was lambasted for daring to criticize Obama in 2008, continued.

“The Framers recognized that presidential abuse of power carried the greatest potential to wreck the republic,” notes Andrew C. McCarthy. “Adamant that the presidency they were creating must not become a monarchy, they carried on debates over the Constitution that were consumed with precluding this very real possibility. In the end, the Framers armed Congress with two responsive weapons: the power of the purse and the power of impeachment.”

Not since Republicans impeached Bill Clinton for lying under oath about a dalliance with an aide have Republicans shown the sort of resolve required when a president violates the Constitution and engages in high crimes and misdemeanors.

It is now up to a small number of House Republicans to keep the effort to impeach Obama alive. In December, Texas Rep. Steve Stockman was characterized by Salon as “exotic” for disturbing proposed Articles of Impeachment to his colleagues.

A number of Republicans have urged impeachment proceedings, including Rep. Duncan Hunter of California (for Obama’s move to bomb Syria without congressional approval), Oklahoma Senator Jim Inhofe and Tom Coburn (over Benghazi), Iowa Republican Steve King and Texas Rep. Louie Gohmert (over the debt), among others. 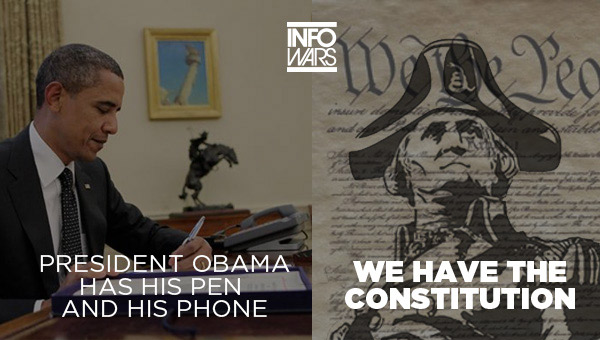