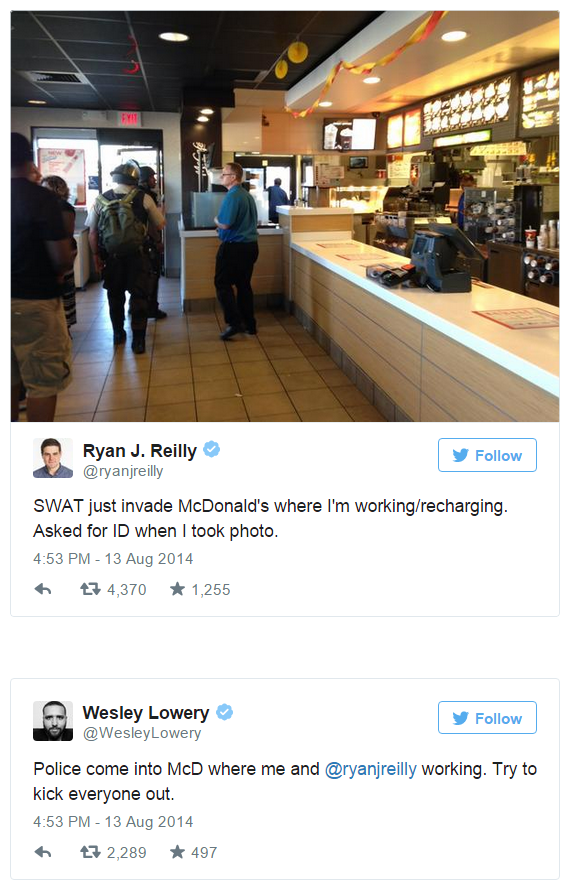 Just about a month ago, we noted that prosecutors in St. Louis County were, somewhat ridiculously, still considering charging two reporters, Wesley Lowery of the Washington Post and Ryan Reilly of the Huffington Post, with “trespassing” charges for their coverage of the Ferguson protests. As you may recall, we also wrote about when they were first arrested, as they were gathering up their things in the local McDonald’s after the police ordered them to leave. Here were their tweets at the time — along with the tweets of a few other reporters on the scene, including one in which police admitted the arrest was a mistake: 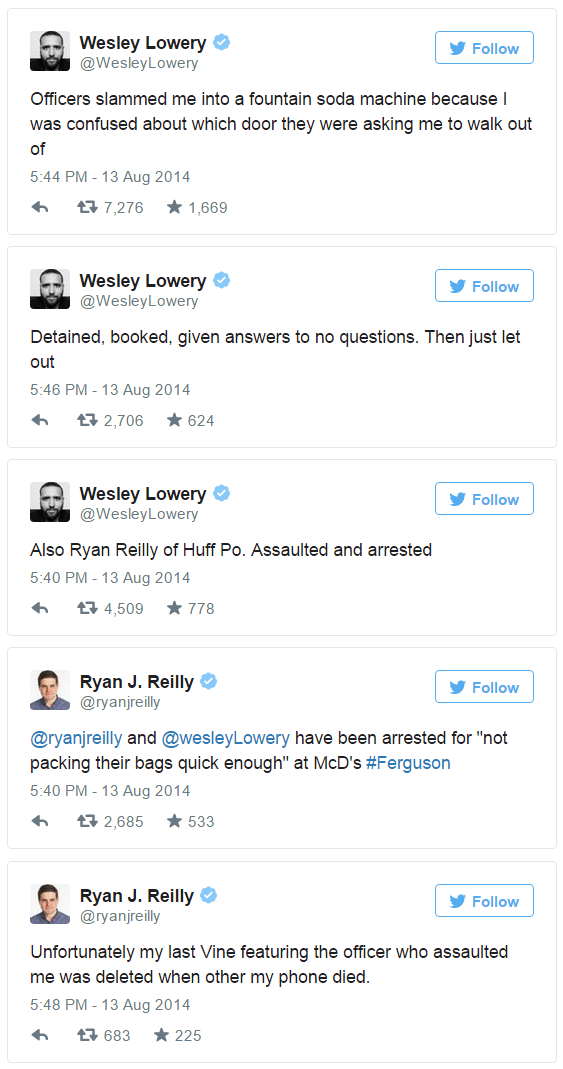 Another reporter, Matt Pearce from the LA Times, reached out to the police, who seemed to indicate that the arrests had been a mistake (and from the descriptions offered by Reilly and Lowery, that sounds about right). Lowery and Reilly were then released and told that no charges would be filed against reporters. 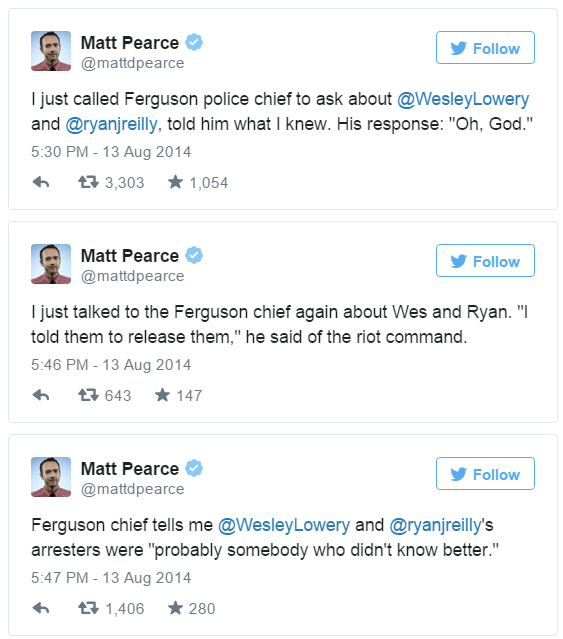 And yet… prosecutors have decided to move forward with the lawsuit, charging at least Lowery with trespassing (Reilly has not officially yet been informed that he’s been sued too, but he expects to be shortly — and a reporter has confirmed from the county that Reilly faces similar charges).

A court summons dated Aug. 6 — just under a year after Lowery’s arrest — was sent to Lowery, 25, ordering him to appear in a St. Louis County municipal court on Aug. 24. The summons notes that he could be arrested if he does not appear.

“Charging a reporter with trespassing and interfering with a police officer when he was just doing his job is outrageous,” Martin Baron, executive editor of The Post, said in a statement Monday. “You’d have thought law enforcement authorities would have come to their senses about this incident. Wes Lowery should never have been arrested in the first place. That was an abuse of police authority.

Meanwhile, it seems noteworthy that this comes just days after St. Louis County “settled” a lawsuit filed against it by another journalist, Trey Yingst, who had been arrested while covering protests in Ferguson in November. In that case, the county agreed to pay Yingst $8,500 and drop all charges… and evidence showed that the police flat-out lied about why they had detained Yingst — using the same excuse they had used against Lowery and Reilly.

A Reason magazine reporter, along with other witnesses, also supported Yingst’s account. And video of the incident, posted that night on Twitter, shows police in skirmish formation approaching Yingst on the sidewalk.

The St. Louis County Police Department, however, tweeted after the incident that Yingst was detained for “failure to disperse” and had “refused” orders from commanding officers to leave the street. A police report echoes the description of events in that tweet.

In the police department’s account, Yingst was standing in the street with protesters and impeding the flow of traffic when ordered to move to the sidewalk. It was then that Vollmer ordered Yingst — three times, by his account — to return to the sidewalk. But Yingst refused to do so, according to the report, and only “slowly walked backwards onto the sidewalk” as the police formation approached.

“The whole police report was basically made up,” Yingst said.

Given that, you would think that prosecutors would shy away from immediately going after journalists where there was pretty strong evidence that they, too, were detained for bogus reasons, but apparently “reason” doesn’t exist in the prosecutor’s office in St. Louis County. I would imagine that both Lowery and Reilly will have pretty strong defenses, and that St. Louis County may end up handing over more taxpayer funds to both of them before this is over. Also, Reilly says he’s spent the last year trying to find out the name of the St. Louis County police officer who slammed his head into the wall — and figures that now that he’s being charged, he might actually be able to find out who it was.