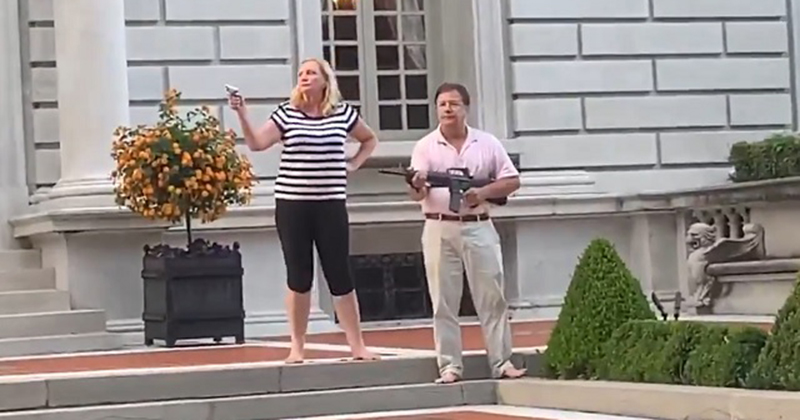 The St. Louis couple who confronted Black Lives Matter protesters with firearms after they breached a gated community have been hit with weapons charges, with a city attorney insisting the demonstration was peaceful.

The two residents, Mark and Patricia McCloskey, were charged on Monday following an incident late last month in which the couple met protesters outside their upscale home wielding firearms after demonstrators entered their private community to protest at the home of Mayor Lyda Krewson.

“It is illegal to wave weapons in a threatening manner at those participating in a nonviolent protest, and while we are fortunate this situation did not escalate into deadly force, this type of conduct is unacceptable in St. Louis,” wrote circuit attorney Kimberly Gardner in a statement.

The McCloskeys were charged with felony unlawful use of a weapon and misdemeanor assault. Gardner, however, suggested the case could be handled out of court through a “diversion program,” saying that would serve as a “fair resolution,” though did not elaborate what that might entail.

The June 28 protest sparked a storm of controversy after footage of the incident went viral, showing the couple outside their mansion pointing a rifle and pistol into a crowd of demonstrators while telling them to leave the neighborhood. The McCloskeys say they felt threatened by the protesters – claiming they openly threatened to kill them and burn down their house.

A lawyer representing the couple, Joel Schwartz, said the charges were “disheartening,” insisting “unequivocally” that the McCloskeys committed no crime. He added that the right to free speech ought to be “balanced with the Second Amendment and Missouri law, which entitle each of us to protect our home and family from potential threats.”

When CHAZistan Marxists showed up at HER house, Seattle Mayor changed her tune. As the mob fires into SUV and an arsonist sets himself on fire trying to burn down a home, what are YOUR legal rights to protect yourself? The case of the lawyers in St. Louis standing outside their home is a good example. The social media mob had a field day with the lawyers in St. Louis but now another picture emerges