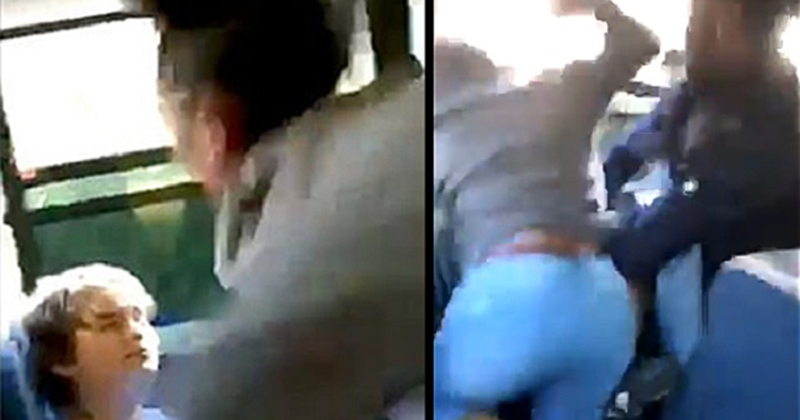 Five African-American students seen pummeling a 14-year-old white boy on a school bus in a video released last week have been charged with misdemeanor battery.

Video of the November 21 attack shows the students punching at a teen sitting in a bus seat.

[…] Superintendent Rex Mitchell says the school district investigated, disciplined the students, and turned information over to the sheriff’s office for action.

The Hamilton County Sheriff’s Office said the State’s Attorney’s Office “stated that this incident does not meet criteria for a hate crime.” Though I don’t believe children should be charged with hate crimes, in September an 11-year-old white girl was charged with a felony hate crime for beating up an 10-year-old black girl on a school bus.

Additionally, last month a white 14-year-old boy was hit with felony hate crime charges over a “slave for sale” joke ad on Craigslist.

The Hamilton County Sheriff’s Office’s statement did not say why the State’s Attorney’s Office felt the incident “does not meet criteria for a hate crime” but one can imagine the reason is because the victim was white.

The Hamilton County School District Superintendent Rex Mitchell released a statement claiming the attack was “completely unrelated to any political statements or agendas” and unrelated to any apparel (i.e. Trump hat) the student wore in the past.

The boy’s mother said last month on Twitter her son faced increased bullying after he wore his Trump hat to school in the past but was not wearing it at the time of the attack.

From that point on he was steadily getting messed with. He was getting hit, tripped & verbally abused on the bus, but it all came to a head yesterday on his bus ride home. The nurse noted there are bruises on his arm that were older along with his new injuries. He didn't tell us

We have received many inquiries regarding donations for this victim and family. They have established a GoFundMe Account. #give Bus Attack Hamilton County Florida https://t.co/wdqjvKkrgO

The family also launched a GoFundMe to help pay for their boy’s home schooling or help them move to a better school district:

I received a call this morning from our attorneys office. I was told that many people have called and asked if there was a way that they could help us either financially or by sending Tyler a gift. We really appreciate all the caring, loving patriots out there. Tyler is not doing well emotionally, he is crying most days, especially today as the kids he thought were his friends are now calling him a racist on his social media. His heart is broken and I feel it is no longer safe for me to send him back to Hamilton County High School. Unfortunately our county has only one public elementary school and one public high school. We are looking for a private school, but I’m not having much luck as everything is so far away. I have come to the realization that we are going to have to move out of this county or home school. We would like to buy Tyler a good laptop computer and other supplies needed to be successful in a home school environment. His attorney has stated that The extent of Tyler’s injures are unknown at this time and the damages he has suffered may last a life time. Our family would be extremely grateful for any amount that you wish to donate. For anyone questioning the validity of this go fund me page please contact my sons attorney at https://www.foyebwalkerpa.com or his twitter account http://twitter.com/foyewalkerpa The money raised on this gofundme page will go to purchasing our two children a laptop computer and other necessities needed for us to home school. We realize that we will have to move out of Hamilton County and any extra money raised will help us do so. Thank you so so much to everyone for the kind words and support! With love, The Griffin Family.

Asked how her son was doing, the boy’s mother said: “Very emotional. He can’t believe so many people actually care.”

Very emotional. He can't believe so many people actually care.

She also said Christmas cards can be sent to their lawyer’s firm: