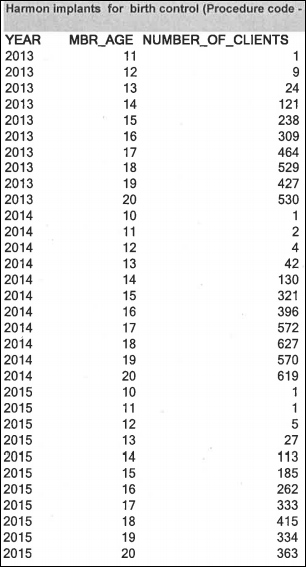 Girls as young as 10 attending public schools in Seattle have been implanted with intrauterine devices (IUDs), the documents show, and as exposed by Life News in July, the children do not need to obtain parents’ permission before the procedure is performed.

While data is still incomplete for 2015, the documents, provided by the Washington Health Care Authority, reveal children as young as 10 and teens from all age groups received implants throughout 2013 and 2014.

“[T]he records show that in 2014 and at least part of 2015, girls as young as 10 received the implants. The largest group of minors that got the birth control implants was 17 years old, according to the data, but girls much younger also received them,” reports Judicial Watch.

The IUD implant, administered at school-based clinics, requires an extremely invasive procedure in which a device is inserted directly into the uterus. The device either emits hormones which typically prevent sperm from fertilizing an egg, or includes copper which is toxic to sperm.

The cost of the procedure is evidently covered for low income families by Medicaid, but children can also access the device by using their own money, or parents’ insurance plans – even without their knowledge.

Life News also highlighted the ironic nature of the program, pointing out how children in Seattle can freely opt into contraception, while at the same time being unable to purchase a soft drink:

“So, a young teen in Seattle can’t get a coke at her high school, but she can have a device implanted into her uterus, which can unknowingly kill her unborn child immediately after conception. Or, if she uses another method, she can increase her chances of health risks for herself, especially if using a new method.”

Judicial Watch notes the State of Washington did not provide requested data regarding adverse events. “Evidently, the state isn’t tracking the negative health consequences from administering the implants in young girls,” JW writes.

Judicial Watch also asked for data concerning the amount of children who received the implant with or without parental consent, “but the state evidently doesn’t keep track and no records were produced.”

As the political watchdog group reports, the effort can be viewed as part of a growing trend by states to override parental consent.

“Last month a separate JW investigation found that Oregon offers minors taxpayer-funded sex change without parental consent. In a matter of months dozens of kids—some younger than 9—received sex-change therapy in Oregon, which earlier this year made it legal for minors to undergo radical treatment for ‘gender dysphoria’ without permission from a parent or guardian.”