Editor’s note: Senate Republicans and Democrats cooked up a last minute deal on Wednesday to end the phony government shutdown and, more importantly for the banksters, avoid a default on the federal government’s debt. The brokered deal will allow the government to borrow more money and continue its decades-long spending binge. 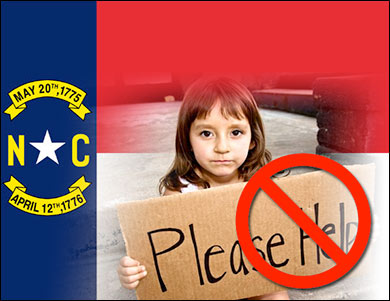 North Carolina is the first state in the Union to rollback welfare payments as the supposed government shutdown continues.

Despite record unemployment and the pernicious economic impact of what Obama’s candidate for Federal Reserve boss describes as the “Great Recession,” the state has decided to put an end to new welfare applications.

North Carolina’s Department of Health and Human Services informed its local offices in a letter sent out last week not to process applications for November benefits until the federal government reaches a deal to end its theatrical partisan politics dog and pony show mischaracterized as a federal government shutdown.

“We are heavily dependent on federal dollars,” Julie Henry, spokeswoman for the state HHS department, told Reuters on Tuesday. “When these kinds of things happen at the federal level, it has an immediate impact.”

“I would say this is an emergency,” said Alexandra Sirota, director of the North Carolina Budget and Tax Center, an organization that scrounges up government money for low-income citizens. “They’re cutting off a lifeline for thousands of North Carolina families who have experienced significant hardships.”

Work First, North Carolina’s euphemistically titled welfare program funded with federal government largess, pays the living expenses of more than 20,000 people in the state, most of them children.

Other state welfare programs will be subjected to shock therapy as well, including the federal Temporary Assistance for Needy Families (TANF), an agency that funds the needs of more than 70,000 needy children.

The feds have told North Carolina that if it wants to continue assisting families in need it will have to raid its own coffers. They insist the state has a so-called “rainy day fund” of around $650 million, but the money remains locked-up due to politics.

Earlier this month, Arizona Governor Jan Brewer ordered state funds be used to continue TANF payments to an increasing number of impoverished residents after the state threatened to stop welfare payments in response to the supposed government shutdown.