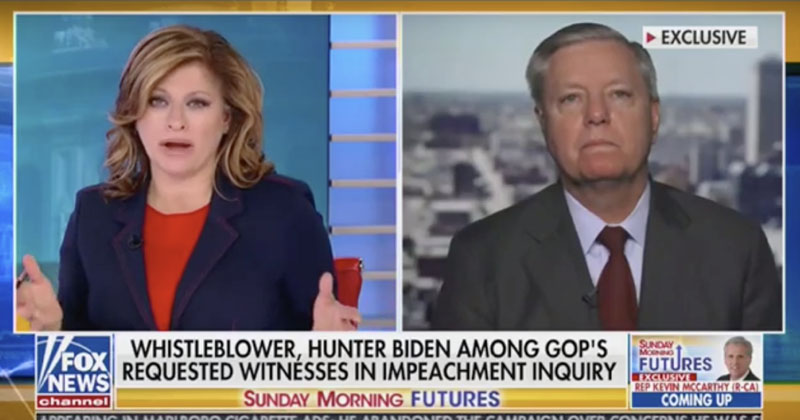 Sen. Lindsey Graham (R-S.C.) claimed revelations that the Ukraine whistleblower could be from the Deep State may change public opinion on impeachment.

RealClearInvestigations has revealed last month that the whistleblower is likely CIA operative Eric Ciaramella, who has worked with Joe Biden and former CIA Director John Brennan, and was involved in the origins of the Russia collusion hoax in 2016.

Graham went on to say that the House Democrats’ impeachment effort has nothing to do with finding the truth about Trump’s Ukraine phone call.

“They’re not trying to find the truth here,” said Graham. “If you really we wanted to know the truth about why Joe Biden said what he did about the prosecutor, ‘If you don’t fire this guy, we’re gonna cut off the money,’ well, let’s find out. Was Hunter Biden in the crosshairs of the prosecutor? This is not about Schiff finding the truth, this is about Schiff trying to destroy the Trump presidency.”

“If you think Schiff is looking for the truth, you shouldn’t be allowed to drive anywhere in America because that’s a ridiculous concept,” he added.

Alex Jones presents a video clip from Tucker Carlson’s Fox program where he and his guest, Ned Ryun, discuss how the far-left Democrats are quickly hijacking their own party and ousting moderates in an attempt to take complete, communist control of America.