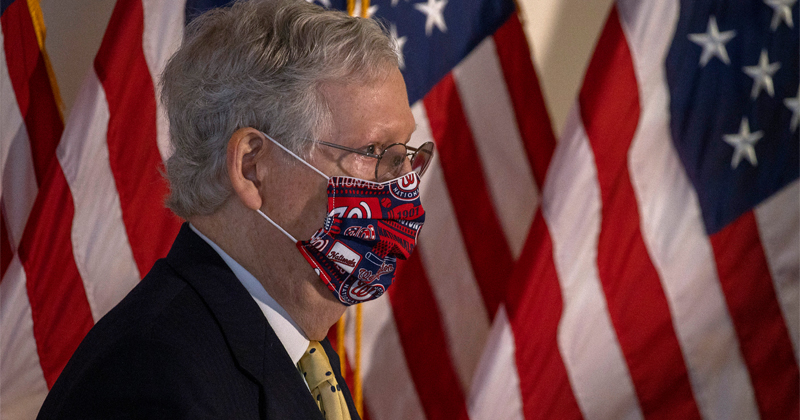 Senate Majority Leader Mitch McConnell (R-KY) told Politico on Tuesday that he doesn’t expect Congress to pass the next relief bill by next week, in stark contrast to a prediction by Treasury Secretary Steven Mnuchin.

McConnell said earlier that there are some ‘differences of opinion’ over a payroll tax cut wanted by the White House, and instead said that the GOP would introduce a bill over the next few days which would be a starting point for negotiations with Democrats.

McConnell did say that another round of direct payments to US citizens was in the cards. He did not elaborate on the size of the payments or income requirements, though he has previously said that payments would be made to those who make $40,000 per year or less.

According to Forbes, the next stimulus package will likely extend the $600 weekly boost to unemployment insurance under the Pandemic Unemployment Assistance (PUA) included in the CARES act.

GOP lawmakers have discussed reducing PUA to only $200 per week, according to The Washington Post. McConnell didn’t mention extending the benefits during his Tuesday speech.

The lowered PUA comes after weeks of debate in Washington, D.C., about how helpful—or unhelpful—the unemployment boost has been for Americans. GOP lawmakers long argued that the boost “disincentivized” Americans to return to work, since many were making the same amount or more on unemployment with the boost than they did before losing their jobs. –Forbes

McConnell also indicated that the Paycheck Protection Program (PPP) may receive a top-off in order to help “hard-hit businesses.” The program provides loans to companies employing fewer than 500 workers, and was previously funded to the tune of $650 billion according to the report.

Meanwhile, the GOP proposal will also reportedly set aside $105 billion for schools and educators. “This majority is preparing legislation that will send $105 billion so that educators have the resources they need to safely reopen,” said McConnell. “That is more money than the House Democrats set aside for a similar fund, by the way. And that’s in addition to support for child care needs.”

The GOP plan will also include more funding for COVID-19 testing.

“Our proposal will dedicate even more resources to the fastest race for a new vaccine in human history, along with diagnostics and treatments … And the federal government will continue to support hospitals, providers and testing,” said McConnell.