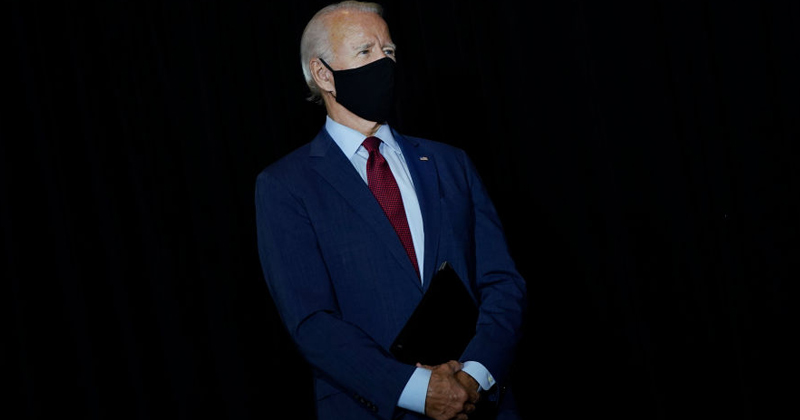 President Trump slammed Joe Biden for calling on governors to mandate that all Americans wear masks for the next three months, accusing the Democratic presidential candidate of politicizing the issue.

Trump claimed Biden has been wrong about the coronavirus pandemic at every turn, “ignoring the scientific evidence and putting left-wing politics before facts and evidence.”

Trump also suggested that Biden was advocating for the president to use executive power to institute the nationwide mask mandate and that Biden was in favor of “locking all Americans in their basements for months on end.”

“To Joe, I would say stop playing politics with the virus,” the Republican president said at a White House press briefing.

And as TheMostImportantNews.com’s Michael Snyder notes, personally, I believe that if you want to wear a mask you should be able to wear a mask, but if you don’t want to wear a mask you should not be forced to wear one.  And I also believe that we should be respectful of the choices that others have made.  I have seen so many instances where a crazed individual has viciously gone after someone else for either wearing or not wearing a mask, and that should not be happening.  Why don’t we all just chill out and let people deal with this pandemic however they want to deal with it?  To me, that makes a whole lot of sense.  Unfortunately, many of our control freak politicians want to micromanage our behavior during the COVID-19 pandemic, and that includes the Democratic candidate for president.

On Thursday, Joe Biden stated that he supports “mandatory mask wearing” in every U.S. state…

Joe Biden, the presumptive Democratic nominee for president, called for a nationwide mask mandate on Thursday, drawing a sharp contrast with President Donald Trump, who rarely wears a mask himself and opposes such mandates.

“Every single American should be wearing a mask when they’re outside for the next three months at a minimum,” Biden said at a press appearance in Wilmington, Delaware.

“Every governor should mandate mandatory mask wearing. The estimates by the experts are that it will save over 40,000 lives in the next three months. Forty thousand lives, if people act responsibly.”

Biden is suggesting a three month time frame, but three months from now doesn’t even get us to the end of fall.

And if there is going to be a fresh wave of this pandemic, it is likely to peak during the winter.

“It’s not about your rights. It’s about your responsibilities as an American,” said Biden, flipping the script on Republicans who argue that mandates infringe on an individual’s right not to wear one.

So in reality Biden will probably still be talking about “mandatory mask wearing” six months from now.  In fact, he will undoubtedly want us to keep wearing masks until a vaccine comes out.

But it is becoming clear that a vaccine is not going to end this pandemic.  In a previous article, I discussed the fact that three separate scientific studies conducted in three different countries have all shown that COVID-19 antibodies disappear very, very rapidly.  So even if a COVID-19 vaccine could be developed that was safe, and even if it produced antibodies, and even if those antibodies were sufficient to confer immunity, that immunity would likely be very, very temporary at best.

It is being reported that any COVID-19 vaccine will probably require more than one trip to the doctor, and if a vaccine will only protect you for a few months at most, that will essentially mean that any potential vaccine is almost completely useless.

And now that we are learning that people can become repeatedly infected by COVID-19, that means that this pandemic is probably going to be with us indefinitely.

If that is true, that would also likely mean that Joe Biden would want all of us to wear masks in public from now on.

Needless to say, I don’t think that too many people are going to go for that.

I am certainly not against masks, but I don’t want anyone telling me that I must wear one in public on a permanent basis.

And a lot of people are starting to question whether the masks that people have been wearing are truly effective.  The following comes from Daniel Horowitz…

Mask-wearing in all of the major cities – from Los Angeles to Miami – has been in place and followed by pressure and community shaming for months. Compliance in most of these places has been off the charts, according to the NYT. Yet the virus is still spreading more than before the mandate. The virus is now spreading in Japan, Hong Kong, and the Philippines, which have near universal mask-wearing. At what point does the mask cult have to provide evidence of the effectiveness of these unconstitutional mandates, and at what point do benchmarks have to be met to maintain such a draconian and life-altering requirement?

Once again, I don’t think that it is wrong to wear a mask at all.  In fact, for many people I believe that it is the correct choice.

But if we let them mandate masks, it will just be a matter of time before they start mandating that we all take the coming COVID-19 vaccine.  Already, many in the mainstream media are quite distressed about the fact that polls have shown that most Americans don’t plan to get the vaccine at all.  The following comes from a USA Today article entitled “Experts worry that a COVID-19 vaccine won’t help if not enough people are willing to get one”…

Only about one-third of Americans say they’d be very likely to get a vaccine to prevent COVID-19, according to a poll released last month – virtually unchanged since the spring.

I think that it is inevitable that some states will try to make a vaccine mandatory once one is available, and there may even be an attempt to do something on the national level.

This is a red line that must not be crossed, and the American people must never submit to such tyranny.

Of course the authorities will continue to do their best to frighten all of us into submission.  On Wednesday, the director of the CDC warned that we are facing “the worst fall” that “we’ve ever had”…

The U.S. now has more than 5 million cases and 166,700 deaths from the coronavirus. And with flu season approaching, the director of the Centers for Disease Control and Prevention warned on Wednesday that things could get a lot more grim.

Robert Redfield said in an interview with WebMD that if Americans don’t follow public health guidance, the country could be facing “the worst fall, from a public health perspective, we’ve ever had.”

You never know, he may actually turn out to be correct.

And it is just a matter of time before a pandemic that is far, far worse than COVID-19 comes along.

But whether or not to wear a mask should be a personal choice, and nobody should ever be allowed to force anyone to take a vaccine under any circumstances.

Unfortunately, many of our politicians believe that it is “unsafe” to leave such decisions up to us.  They believe that they must micromanage our lives for the good of society, and a large segment of the population plans to vote for such politicians in November.