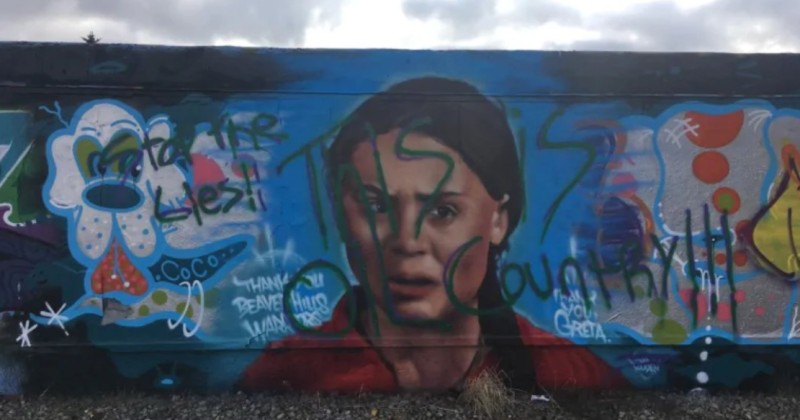 A mural of eco-activist Greta Thunberg was defaced in Edmonton, Alberta, with the vandal telling Thunberg to stop lecturing him on how to live his life.

The original mural portrayed Greta during her infamous “how dare you” rant in at the UN in September.

However, it lasted just a few days before being defaced by a vandal who spray painted over it the words, “Stop the lies: This is oil country.”

A mural of climate activist Greta Thunberg appeared in #yeg after she rallied in Edmonton on Friday
A CBC journalist was filming when two people began spray-painting over the teen's face.
Read more: https://t.co/6NL5N37DQb #yeg #oilsands #yyc pic.twitter.com/ifS926TMuy

“My father has worked in the oil industry. We don’t need foreigners coming in and telling us how to run our business, support our families, put food on our tables,” the culprit told a CBC journalist.

“It is absolutely intolerant of them [climate activists] to tell us how to change our lives and our people. She should go back to her country and try to make her country better,” he added.

Another slur in French was added to the mural later that day.

Artist: "Nothing lasts forever. One of my favourite things a/b that wall is that anyone is allowed 2 express themselves there, so I'm not upset @ all" pic.twitter.com/Yt1C8skWqD

Thunberg has repeatedly lectured Canadians to lower their standard of living while saying next to nothing about China, the biggest polluter on the planet.

As we previously highlighted, German drivers began displaying ‘f*ck you Greta’ bumper stickers to protest against being lectured about global warming by a 16-year-old child.