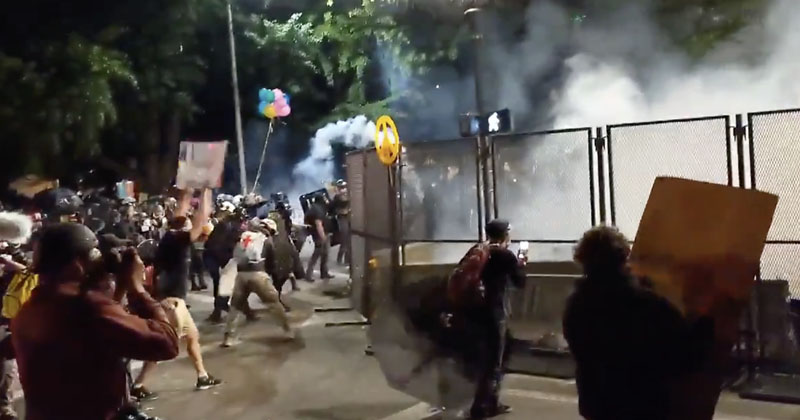 Demonstrators in downtown Portland are using a range of weapons in their nightly skirmishes with law enforcement officers, and their growing arsenal now includes everything from leaf blowers to lasers.

Protesters tried out some new tactics during the latest fracas. Footage shows a group of helmeted, masked activists using an electric saw to break apart the fence used to protect the city’s besieged federal courthouse. The operation appeared to be well-coordinated, with several demonstrators using shields to protect the individual using the saw.

Federal agents have yet to respond

This is the kind of agitation that brings them back out each time they retreat inside pic.twitter.com/8yNbnFB9K3

#Antifa's cut off the fence with electric saws at the federal court in #Portland, Oregon, #USApic.twitter.com/jVYUqozbnj

There was further evidence that demonstrators have become more organized. A team of protesters was spotted pulling on two ropes that had been attached to the fence. However, it’s unclear whether their efforts produced the desired result.

Antifa apparently took my suggestion to use grappling hooks to pull down the fence. pic.twitter.com/GxQLLZ2D5c

For weeks, protesters have utilized high-powered lights to disorient and blind police. In a clip posted to Twitter, demonstrators shine what appears to be a strobe light into the faces of law enforcement personnel standing behind the courthouse fence. One protester deployed a disco light during Friday’s skirmish, although it’s unclear whether it served a tactical purpose or was just for show.

Portland 7/25- Antifa militants are using high powered flashlights to blind and disorient federal officers…Wonder who paid for those ? pic.twitter.com/IKSlD8dz9k

Out of the tear gask, glowing blue and purple from a disco light,

A protest dad appears armed with a leaf blower to dissipate the gas outside the federal courthouse in Portland pic.twitter.com/O2g0nXJJOX

Some weapons in the protesters’ arsenal are crude but still have the potential to be extremely dangerous. Demonstrators have been filmed and photographed hurling all kinds of projectiles at law enforcement personnel. According to the Portland Police, items that have been thrown at officers include glass bottles and ball bearings.

War-like scenes again as federal officers stand guard outside the Portland federal courthouse and are hit with projectiles thrown by rioters. #antifa pic.twitter.com/7GpBsINcJq

Some of the items thrown at officers include paint, ball bearings, and glass bottles, which are all criminal acts. pic.twitter.com/9ghKqB8urT

Leaf blowers made their debut appearance in downtown Portland earlier this week. Protesters have used the seemingly benign gardening tool to reroute tear gas fired by federal agents. It appears that law enforcement officers have adopted the same tactic, with videos emerging on Friday of “leaf blower wars” between police and activists.

With leaf blowers, the protesters appear to be winning this battle with the feds, who have launched an immense amount of tear gas pic.twitter.com/A1D7dVhg0p

Similar to high-powered lights, lasers have been used by protesters to obscure the vision of cops and federal agents operating in the city. Footage from Friday night shows a powerful purple laser being shone directly in the eyes of an officer standing guard behind the courthouse fence. Earlier, the White House claimed that three federal officers “were likely left permanently blinded” by lasers during clashes with Portland protesters.

Protesters are ordered to vacate. Nobody is leaving

Much of downtown Portland has been covered in graffiti, but spray paint has also been used as an offensive weapon. On several occasions, demonstrators have used paint to destroy or vandalize security cameras. In one video, what appears to be a paintball or BB gun was used to knock a camera out of commission.

At the antifa violent protest in downtown Portland, a rioter tries to destroy or vandalize a security camera on the Justice Center using a BB or paint ball gun. Rioters for weeks have destroyed cameras in the area. #PortlandRiots Video: @VenturaReport pic.twitter.com/LNV1HAtUsA

According to the Portland Police, several cameras in the city that are not even functional have been attacked.

To the individuals tampering with the cameras by using unlawful lasers and spray paint. No need they dont work

Arson has become a go-to tactic for demonstrators laying siege to the federal courthouse. Footage posted to social media shows several fires being lit outside the building. Fires have also been used to target Portland’s police union office, as well as seemingly innocent landmarks. An elk statue was so badly burnt by demonstrators that the city decided to remove the sculpture.

Biden’s “peaceful protesters” in Portland just set fire to the federal courthouse. Militants have been targeting the structure all week.

When rioters spray-paint or shout, “Burn it down,” on buildings, they mean it.pic.twitter.com/Qk6VEgQkf7

Alex Jones breaks down his plans to initiate a foundation called The Human Defense Force in the name of preserving humanity for future generations.