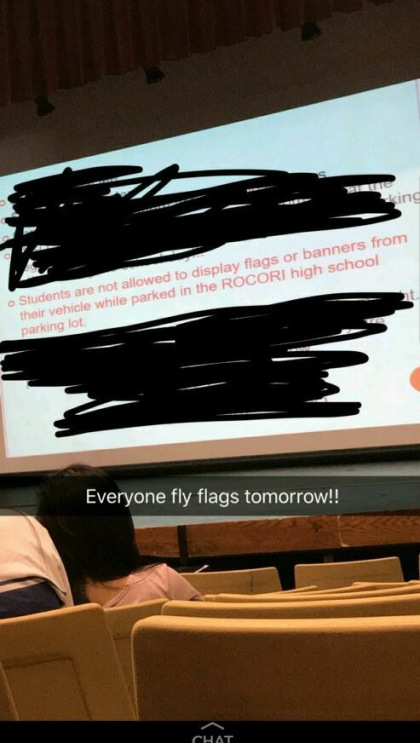 Students at a Minnesota high school defied a mandate Wednesday prohibiting them from flying the American flag on vehicles in the school parking lot.

“Students are not allowed to display flags or banners from their vehicle while parked in the ROCORI High School parking lot,” the new policy stated, attempting to prohibit Confederate flag displays.

The handbook also claimed flag policy violators’ vehicles “may be given a ticket or towed away at the expense of the owner.”

A Snapchat photo from an orientation class showed some students were immediately planning to defy the mandate.

Upset the new policy unfairly affected the display of the U.S. flag, students organized a peaceful protest in which numerous vehicles flew the red, white and blue symbol of freedom proudly.

“We wouldn’t care if they didn’t allow Confederate flags,” a ROCORI senior told CBS Minnesota. “That would be fine with us, so long as we can still fly the American flag.”

School administrators later met with students and agreed on an exception to the flag policy allowing students to fly the American flag.

“The kids have been awesome today,” Jenson said in a statement to CBS Minnesota. “There is a resolution. They can bring the American flag.”

An official statement from the school also indicated the flag display issue had been resolved, admitting “students led a very respectful and appropriate protest of the RHS student handbook guideline regarding display of flags on vehicles.”

“Student leaders have offered to help support an approach that allows American flags to be displayed on vehicles while, at the same time, helping to encourage respect for others,“ the statement reads.