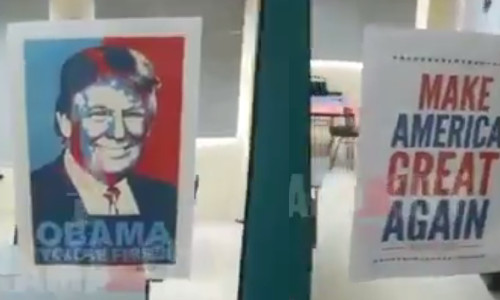 Students at one school are fed up with their anti-Trump teacher who accuses them of being racist for supporting the president and are pushing back, according to a video spreading on social media.

The video is making the rounds after an unidentified teacher originally uploaded her reaction to students displaying printed Trump memes around her classroom and writing some key details of his ‘America First’ platform on her white board – for which she called them ‘racist’ despite no evidence of any race-based trolling in the footage.

“Because I am at work, I am not going to cuss, but I do want to share with you the straight, blatant racism,” she begins, explaining that she is making the video for her friends.

Teacher pushes anti-Trump agenda on students, look what they do to her class!Join comvo.net for freespeech social-media because facebook is censoring everything – follow us @danktrumpmeme

“I told you they did the whole ‘Trump thing,'” she narrates while showing print-outs of ‘Obama, You’re Fired,’ and ‘Make America Great Again’ memes.

She points to an electoral college map depicting the 2016 election results, saying, “I told y’all I was not exaggerating when those kids wanted to keep reminding me that I was from a red state,” before fixating on a written list of key goals and accomplishments of “Trump’s Agenda” as further evidence of her pupils’ blatant racism.

“Everybody wants to tell me these kids aren’t racist, they’re just ‘rowdy’ – they better be glad I’m at work,” she threatens without elaborating further.

Proceeding down the hall, she notes that a colleague in the same department is ‘Mexican-American’ while filming a ‘border wall’ made from computer paper stretched across her doorway, noting, “They build a wall.”

“They built a wall,” her colleague corrects – a detail that did not escape many social media users.

The woman turns the camera back on herself, announcing that she has to “go post in my black teacher group” online, presumably about the ‘incident.’

“I don’t like those kids,” she continues. “They’re mad disrespectful.”

“Everybody kept trying to tell me, ‘They’re not racist, they’re not sexist’ – what is this in my room?”

The video is just the latest in an ever-growing collection of evidence that educators across the country are clashing with their students on the political battlefield, with teachers and professors regularly being caught promoting the assassination of President Trump, calling for a ‘resistance’ to his administration, and targeting pro-Trump students for harassment and all manner of verbal abuse.

Infowars has documented many of these incidents, including –

There are many indicators that Generation Z could be the most conservative generation since World War II, potentially acting as a powerful antidote to the more liberal Generation Y and Millennials – and leftist educators.