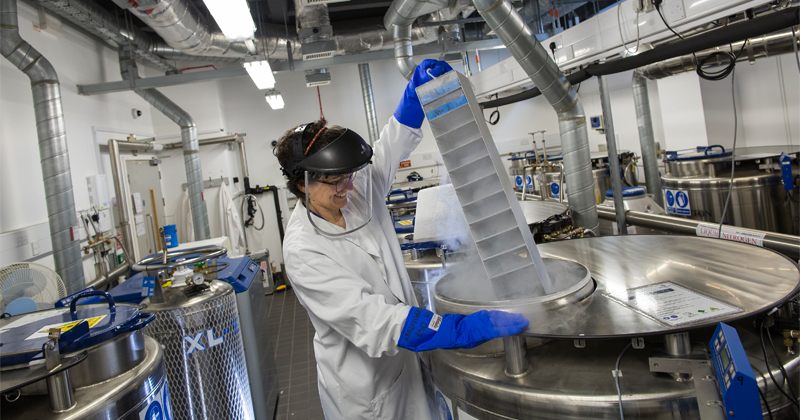 The study, published in Developmental Cell on July 10, found that DGLA can induce ferroptosis in an animal model and in actual human cancer cells. Ferroptosis is an iron-dependent type of cell death that was discovered in recent years and has become a focal point for disease research as it is closely related to many disease processes.

Jennifer Watts, a Washington State University associate professor and corresponding author on the paper, said this discovery has many implications, including a step toward a potential treatment for cancer.

“If you could deliver DGLA precisely to a cancer cell, it could promote ferroptosis and lead to tumor cell death,” Watts said. “Also, just knowing that this fat promotes ferroptosis might also affect how we think about conditions such as kidney disease and neurodegeneration where we want to prevent this type of cell death.”

DGLA is a polyunsaturated fatty acid found in small amounts in the human body, though rarely in the human diet. Compared to other fatty acids, such as those found in fish oil, DGLA is relatively understudied.

Watts has been researching dietary fats including DGLA for nearly twenty years, using the nematode Caenorhabditis elegans as an animal model. A microscopic worm, C. elegans is often used in molecular research because it is transparent and allows scientists to easily study cell-level activity in a whole animal over its relatively short lifespan. Results found in the C. elegans cells are also often transferable to human cells.

Watts’ research team discovered that feeding nematodes a diet of DGLA-laden bacteria killed all the germ cells in the worms as well as the stem cells that make the germ cells. The way the cells died carried many signs of ferroptosis.

“Many of the mechanisms we saw in the nematodes were consistent with the hallmarks of ferroptosis in mammalian systems, including the presence of redox-active iron and the inability to repair oxidized lipids, which are like molecular executioners,” said Marcos Perez, a WSU doctoral student and first author on the paper.

To see if the results would translate to human cells, Watts and Perez collaborated with Scott Dixon of Stanford University, who has been studying ferroptosis and its potential for battling cancer for many years.

Taking what they had learned from the nematode work, the researchers showed that DGLA could induce ferroptosis in human cancer cells. They also found an interaction with another fatty acid class, called an ether lipid, that had a protective effect against DGLA. When they took out the ether lipids, the cells died faster in the presence of DGLA.

In addition to this new knowledge, the study also demonstrated that C. elegans can be a useful animal research model in the study of ferroptosis, a field that has had to rely mostly on cell cultures.

To take this research further, Watts’ team recently received a $1.4 million grant from the National Institutes of Health to investigate what makes the nematode germ cells so susceptible to DGLA and explore the role of mitochondria, the cell organelles involved in burning fat and regulating metabolism, in ferroptosis.