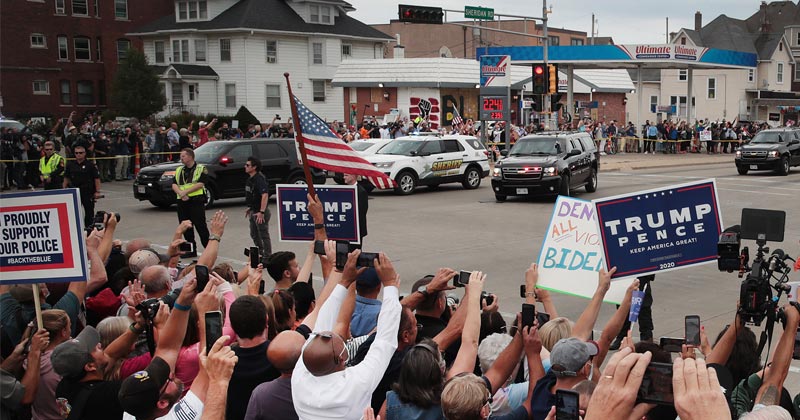 Yahoo! News, which conveniently banned user comments before the election, admitted that a majority of suburban voters view BLM unfavorably in the aftermath of the Kenosha riots.

“In July, the Black Lives Matter movement received a 46 percent favorable to 45 percent unfavorable rating from suburban Americans. Right after the Republican convention, that rating flipped: 44 percent favorable to 50 percent unfavorable,” the outlet admitted. “In July, a majority of suburbanites said police brutality against minorities (53 percent) was a bigger problem than crime in their communities (47 percent). One month later, those same suburbanites were saying the opposite, with 53 percent now citing crime as the bigger problem.”

Obviously the rioting has backfired on Democrats.

“In late July, Biden led Trump by a decent margin in the suburbs: 48 percent to 41 percent. In late August, the same suburban Americans told Yahoo News and YouGov that they preferred Trump over Biden, 45 percent to 43 percent. That’s a 9-point swing,” the article added.

Given how mainstream polls are biased toward Biden due to their oversampling of Democrats – and the fact that Trump voters are generally silent to pollsters – this is a revealing because the truth is probably even more damning than what’s being admitted.

This is probably alarming for the ever leftist Yahoo! News, as the outlet buried the poll results in an article published under this rather abstruse headline:

Now it’s readily apparent why Democrats are pushing for “mail-in ballots” which leads to voting fraud: Biden is becoming a weaker and weaker candidate each passing day.

As previously reported, Trump’s support among black supporters is surging, which is catastrophic for Biden as he was heavily dependent on black support for the Democratic Party nomination.

Alex Jones lays out the truth behind netizens claiming Joe Rogan is being censored by Spotify.