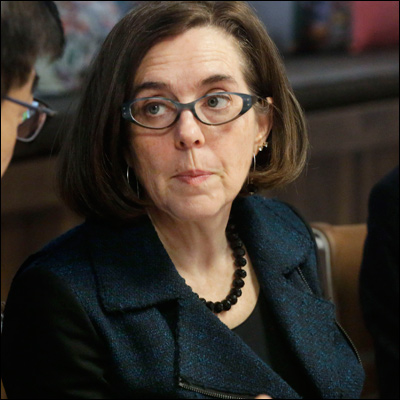 “If @realDonaldTrump asks me to deploy Oregon Guard troops to the Mexico border, I’ll say no,” Brown tweeted. “As Commander of Oregon’s Guard, I’m deeply troubled by Trump’s plan to militarize our border.”

Brown’s statement, however, is trivial; the president has the power to federalize National Guard troops through a variety of ways, such as 10 U.S. Code § 252 – Use of militia and armed forces to enforce Federal authority:

Whenever the President considers that unlawful obstructions, combinations, or assemblages, or rebellion against the authority of the United States, make it impracticable to enforce the laws of the United States in any State by the ordinary course of judicial proceedings, he may call into Federal service such of the militia of any State, and use such of the armed forces, as he considers necessary to enforce those laws or to suppress the rebellion.

Previous presidents have federalized the National Guard, perhaps most famously when President John F. Kennedy did so to Alabama’s National Guard during the integration of the University of Alabama in 1963, a move which took control away from Gov. George Wallace who had opposed the move.

The illegal alien caravan, which swelled to over 1,000 marchers, could have easily fallen under the definition of an “unlawful assemblage,” especially if its sheer size overwhelmed Border Patrol agents.

Additionally, the fact that Mexican officials are giving Central American immigrants travel visas to encourage them to enter the US illegally, despite Mexico having its own working asylum program, bolsters Trump’s case for deploying the National Guard.

In short, there’s ways for the president to protect the border without violating the Posse Comitatus Act – and besides, what good is national defense if it isn’t protecting a country’s borders?


But going back to Gov. Brown’s statement, it’s worth noting that 33 states are ran by Republican governors, so it’s not like Trump will have a hard time finding allies on the state level, especially in the border states of Arizona and Texas.

Texas in particular has already sent hundreds of state troopers to patrol the border under a security program which began during the 2014 illegal alien surge.