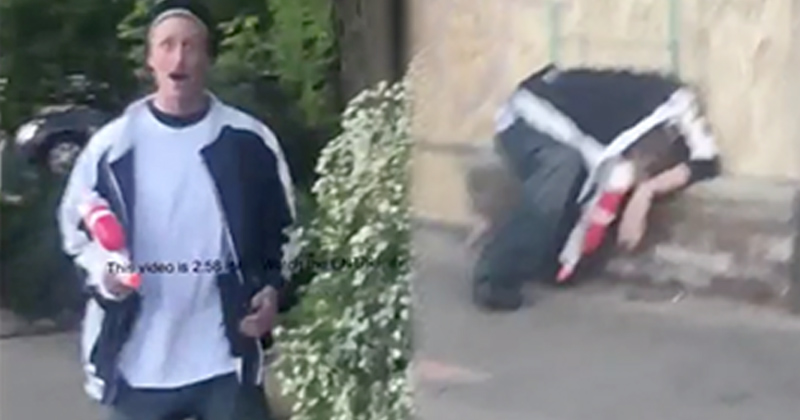 Footage uploaded to the internet shows a white male holding a super soaker water gun he claims is filled with “cyanide” to “blind” people being attacked by a mob of people after his malicious intentions were revealed.

The video, uploaded to WorldStarHipHop.com, begins with a clip of a woman pulling a gun on looters before switching to the main footage of the individual carrying the chemical-filled water gun.

“What’s in there man?” the cameraman asked the person carrying the super soaker.

“Cyanide!” the guy responded while continuing to antagonize the cameraman by calling him a “pussy ass boy.”

The man filming responded, “Yea, now you’re walking away,” and the water gun guy rushed back towards him yelling, “You wanna go blind right now? I’ll blind you right now, I swear to God.”

Next, the person filming caught the attention of a large group of black men nearby and told them to “tie up” the man with the super soaker because he made threats about having chemicals the water gun.

“He’s trying to blind people!” the cameraman screamed as the crowd started to circle the individual making threats, adding, “Don’t hurt him, tie him up.”

As the crowd approached the individual and became more irate, the cameraman continued telling them, “I saw this guy making threats at black people. He threatened to blind me. Tie him up don’t hurt him.”

Despite pleading with the group to “get the water gun,” and to “tie him up,” the group beat the man until he was apparently unconscious.

Once the man was knocked out, people snatched the water gun from him and confirmed to the cameraman that it was filled with chemicals.

This is another example of citizens stopping bad actors from committing crimes amid the chaotic riots taking place across the country this weekend.