On Super Tuesday, establishment GOP candidates pledged their fidelity to the foreign policy objectives of Israel and AIPAC as they strived to outdo each other in belligerent rhetoric aimed at Iran. Romney, Santorum and Gingrich promised to support an Israeli attack some analysts predict will occur in June.

“If Iran doesn’t get rid of nuclear facilities, we will tear them down ourselves,” said Rick Santorum, who has expressed strongly worded anti-Iran sentiment in the past. In January Santorum said he would not hesitate to launch an attack on Iran.

Santorum: Iran poses an “existential threat to freedom loving people throughout the world.”

Attacking Iran over its unsubstantiated nuclear weapons program has remained at the forefront of his presidential campaign. In November, appearing before a small crowd in rural New Hampshire, Santorum called for a “preemptive strike” following a less than conclusive IAEA report on Iran’s nuclear program.

“As I’ve sat and watched this play out on the world stage, I have seen a president who has been reticent,” the former Pennsylvania senator said from the AIPAC stage in the nation’s capitol while the other candidates remained on the campaign trial.

Mitt Romney delivered a satellite video speech to the convention. He promised that if he becomes president he will stand with Israel “in all conditions.” Romney said he would end Obama’s “procrastination” on confronting Iran by imposing further draconian sanctions. “I will make sure Iran knows of the very real peril that awaits if it becomes nuclear,” he said.

Newt Gingrich also addressed the convention via satellite link from his home state of Georgia. He criticized Clinton’s State Department for its policy on Iran and characterized U.S. intelligence as “timid.”

Despite the assessment by intelligence analysts, Gingrich told AIPAC he believes Iran has crossed a “red line” with its nuclear program and was “deepening their commitment to nuclear weapons while we talk.”

“I will provide all available intelligence to the Israeli government, ensure that they have the equipment necessary, and reassure them, that if an Israeli prime minister decides that he has to avoid the threat of a second Holocaust through pre-emptive measures, that I would require no advance notice,” he said.

Gingrich promises to work with Israel to attack Iran.

The strident rhetoric of the GOP hopefuls arrives following Israeli PM Netanyahu’s address before AIPAC on Monday. He said Israel has waited for diplomacy to work but “we cannot afford to wait much longer.”

“A nuclear-armed Iran would dramatically increase terrorism by giving terrorists a nuclear umbrella,” he warned. “That means that Iran’s terror proxies like Hezbollah, Hamas will be emboldened to attack America, Israel, and others because they will be backed by a power with atomic weapons.”

Netanyahu at AIPAC: All options on the table.

Netanyahu cited the Holocaust in his speech. “My friends, 2012 is not 1944,” he said. “Today, we have a state of our own. And the purpose of the Jewish state is to defend Jewish lives and to secure the Jewish future.”

Israeli political leaders and members of Congress argue that Iran will engage in genocide and a second Holocaust if they manage to produce a nuclear weapon.

Israel, Congress and the establishment media repeatedly cite a mistranslation of a speech delivered by Iranian president Ahmadinejad in 2008 in order to argue Iran will wipe “Israel off the face of the earth.”

The remark is attributed to a deliberate Middle East Media Research Institute (MEMRI) mistranslation. MEMRI is an Israel-centric propaganda tool run by a former colonel in Israeli intelligence and specializes in dredging up obscure antisemitic remarks made by Arab and Muslim critics of the Jewish state.

The AIPAC speeches by Romney, Santorum and Gingrich reveal that the number one political issue this election season is not the economy or the welfare of the American people, but the interests of fanatical Likudnik warmongers in Israel who are determined to attack Iran and initiate not only a conflagration in the Middle East, but a Third World War. 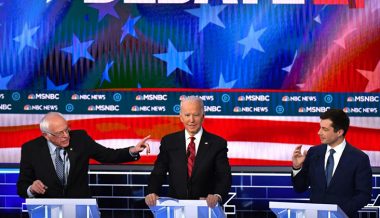