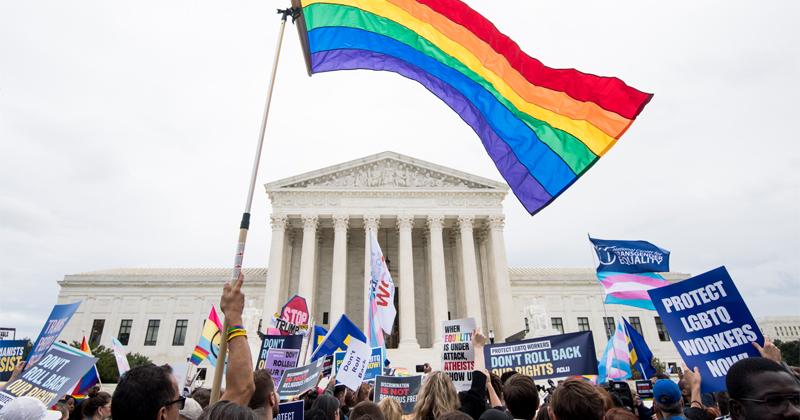 In Bostock v. Clayton County (2020), a 6-3 majority ruled that discrimination on the basis of sexual orientation or gender identity violates Title VII’s prohibition on sex discrimination.

While a technical error has made the ruling inaccessible, the ruling represents an utter rejection of the original meaning of the term “sex” in federal law, twisting it to mean something Congress cannot have intended in 1964.


This is a breaking story and will be updated.

The Episcopal Church has shifted hard-left in recent years, abandoning the central claims of the Bible on issues like Jesus’s bodily Resurrection but also embracing LGBT ideology. This involves rejecting the Bible’s clear condemnation of homosexual activity as sinful and its clear statement that God made humans male and female.

“Americans must be able to rely on what the law says, and it is disappointing that a majority of the justices were unwilling to affirm that commonsense principle. Redefining ‘sex’ to mean ‘gender identity’ will create chaos and enormous unfairness for women and girls in athletics, women’s shelters, and many other contexts,” Alliance Defending Freedom Vice President of Advocacy John Bursch said in a statement.

“Civil rights laws that use the word ‘sex’ were put in place to protect equal opportunities for women. Allowing a court or government bureaucrats to redefine a term with such a clear and important meaning undermines those very opportunities—the ones the law was designed to protect.”

Carrie Severino also condemned the ruling. “Justice Scalia would be disappointed that his successor has bungled textualism so badly today, for the sake of appealing to college campuses and editorial boards. This was not judging, this was legislating—a brute force attack on our constitutional system,” she tweeted.

“Today six judges acting as advocates opted to rewrite the statute themselves, short-circuiting the legislative process and in the process denying the people a decision that should be theirs to make on a major issue,” Severino tweeted. “Have no doubts about what happened today: This was the hijacking of textualism. You can’t redefine the meaning of words themselves and still be doing textualism. This is an ominous sign for anyone concerned about the future of representative democracy.”

Have no doubts about what happened today: This was the hijacking of textualism.

You can't redefine the meaning of words themselves and still be doing textualism. This is an ominous sign for anyone concerned about the future of representative democracy. (end)


Author of ‘From Democrat To Deplorable’ reveals how ANTIFA tried to ruin his life and how he fought back.