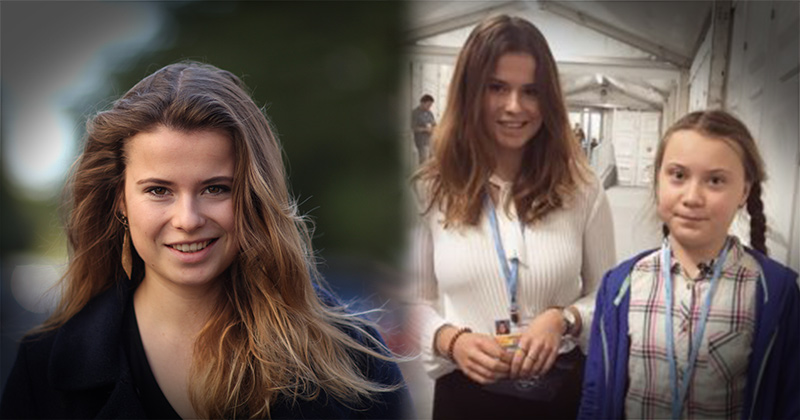 16-year-old climate opportunist Greta Thunberg is being pushed by the worldwide establishment after speaking in front of Congress, the U.N., meeting the Pope and being the face of this weekend’s climate protests.

How did this teenage girl become such a dominant figure in the issue of climate protection?

It turns out there are powerful forces behind the sudden rise of the Swedish adolescent, including some of the usual suspects.

A woman who accompanies Thunberg to most public events is German climate activist Luisa-Marie Neubauer.

EuropeReloaded.com reported, “Thunberg soon also got her own coach – a well-known climate activist from Germany by the name Luisa-Marie Neubauer (pictured). What is the likelihood of a young girl who starts a school strike outside the Swedish parliament, getting schoolchildren from all over the world to join her cause and fight against climate change? And how often do 16-year-olds have their own coaches?”

5. HER HANDLER
On the photos behind her u see Luisa-Marie Neubauer, her handler.
She's a member of "ONE Foundation" managed by BONO, Bill Gates and George Soros pic.twitter.com/CrccrEzB81

With regards to all the people who are currently planning to steal our future: Nice try. But no. #Fridaysforfuture @GretaThunberg #hamburg pic.twitter.com/WnY29G2nkd

It turns out Neubauer is the “Youth Ambassador” of the “ONE” foundation, an international lobbying organization funded by George Soros, Bill and Melinda Gates, Bono and others.

In a tweet from 2018, Neubauer wrote, “Perks of being a ONE Youth Ambassador: you get to meet awesome ONE campaigners all over the world.”

Perks of being a ONE Youth Ambassador: you get to meet awesome ONE campaigners all over the world 🌎 This German-Canadian ONE encounter was a perfect end of my Y7 Journey to Ottawa 🙌🏻 Thanks @ONE_in_Canada for having me! #ONEspirit #Y72018 pic.twitter.com/7xS6bnzJQU

According to the “ONE” website, “ONE originated in conversations between Bill Gates and Bono in the early 2000s about the need to better inform Americans about extreme poverty around the world.”

Like anti-gun activist David Hogg, the globalist establishment is shoehorning Thunberg into the public spotlight to further their agenda even if it means taking advantage of a teenager with Asperger’s.

Alex Jones exposes the manipulation of today’s youth in this exclusive Infowars report:

I want you to panic.

Why is she mad?