CNN reports that some 200 US troops are staging along Syria’s border, this as reports reveal huge amounts of US-provided flour smuggled into Syria have formed the foundation of Al Qaeda’s public relations strategy. Together with huge amounts of US-provided weapons, the aid is fueling Al Qaeda’s continued operations and atrocities inside Syria. The addition of US troops along Syria’s border appears to be a response to recent and significant gains made by the Syrian government in stamping out terrorist operations nationwide.

As reported in October 2012, the networks used to flood Iraq with weapons and Al Qaeda militants during the US occupation, had been positively identified by the extensive academic efforts of the US Army’s own West Point Combating Terrorism Center (CTC). Two reports were published between 2007 and 2008 revealing a global network of Al Qaeda affiliated terror organizations, and how they mobilized to send a large influx of foreign fighters into Iraq. 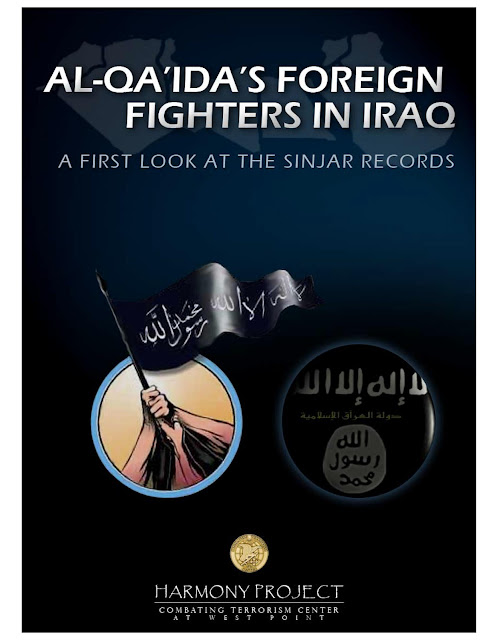 Image: Cover of the US Army’s West Point Combating Terrorism Center report, “Al-Qa’ida’s Foreign Fighters in Iraq.” The report definitively exposed a regional network used by Al Qaeda to send fighters into Iraq to sow sectarian violence during the US occupation. This exact network can now be seen demonstrably at work with NATO support, overrunning Libya and now Syria. The terrorists in the eastern Libyan city of Benghazi that US Ambassador Stevens was arming, is described by the 2007 West Point report as one of the most prolific and notorious Al Qaeda subsidiaries in the world.

The first report, “Al-Qa’ida’s Foreign Fighters in Iraq,” was extensively cited by historian and geopolitical analystDr. Webster Tarpley in March of 2011, exposing that NATO-backed “pro-democracy” rebels in Libya were in fact Al Qaeda’s Libyan Islamic Fighting Group (LIFG), listed by the US State Department, United Nations, and the UK Home Office (page 5, .pdf) as an international terrorist organization.

These very same terrorist would then be documented flooding into Syria, primarily through Turkey with NATO complicity.

Abdulhakim Belhadj, head of the Tripoli Military Council and the former leader of the Libyan Islamic Fighting Group, “met with Free Syrian Army leaders in Istanbul and on the border with Turkey,” said a military official working with Mr Belhadj. “Mustafa Abdul Jalil (the interim Libyan president) sent him there.”

Syrian rebels held secret talks with Libya’s new authorities on Friday, aiming to secure weapons and money for their insurgency against President Bashar al-Assad’s regime, The Daily Telegraph has learned.

At the meeting, which was held in Istanbul and included Turkish officials, the Syrians requested “assistance” from the Libyan representatives and were offered arms, and potentially volunteers.

“There is something being planned to send weapons and even Libyan fighters to Syria,” said a Libyan source, speaking on condition of anonymity. “There is a military intervention on the way. Within a few weeks you will see.”

Later that month, some 600 Libyan terrorists would be reported to have entered Syria to begin combat operations and have been flooding into the country ever since.

Image: (Left) West Point’s Combating Terrorism Center’s 2007 report, “Al-Qa’ida’s Foreign Fighters in Iraq” indicated which areas in Syria Al Qaeda fighters filtering into Iraq came from. The overwhelming majority of them came from Dayr Al-Zawr in Syria’s southeast, Idlib in the north near the Turkish-Syrian border, and Dar’a in the south near the Jordanian-Syrian border. (Right) A map indicating the epicenters of violence in Syria indicate that the exact same hotbeds for Al Qaeda in 2007, now serve as the epicenters of so-called “pro-democracy fighters.”

US CIA is Propping up Al Qaeda in Syria

These are now astonishingly the very areas the US CIA is overseeing the flow of thousands of tons of weapons and aid – aid that is clearly falling almost entirely into the hands of Al Qaeda’s Syrian franchise, Jabhat al-Nusra.

The New York Times in their article titled, “Arms Airlift to Syria Rebels Expands, With C.I.A. Aid,” admits that:

With help from the C.I.A., Arab governments and Turkey have sharply increased their military aid to Syria’s opposition fighters in recent months, expanding a secret airlift of arms and equipment for the uprising against President Bashar al-Assad, according to air traffic data, interviews with officials in several countries and the accounts of rebel commanders.

The airlift, which began on a small scale in early 2012 and continued intermittently through last fall, expanded into a steady and much heavier flow late last year, the data shows. It has grown to include more than 160 military cargo flights by Jordanian, Saudi and Qatari military-style cargo planes landing at Esenboga Airport near Ankara, and, to a lesser degree, at other Turkish and Jordanian airports.

While the West attempts to claim these weapons are being sent to “moderates,” the US State Department itselfadmits that Al Qaeda is operating in every major city in Syria, carrying out hundreds of terrorist attacks, and is by far the most highly organized, most prominent militant front in the conflict. If the West via Saudi Arabia and Qatar is sending thousands of tons of weapons to “moderates,” who is sending more weapons to Jabhat al-Nusra?

The obvious answer is there are no moderates, and the West has been intentionally arming Al Qaeda from the beginning. In fact, this is a documented conspiracy first revealed as early as 2007 by Pulitzer Prize-winning journalist Seymour Hersh in his New Yorker article titled, “”The Redirection: Is the Administration’s new policy benefiting our enemies in the war on terrorism?” which stated specifically:

To undermine Iran, which is predominantly Shiite, the Bush Administration has decided, in effect, to reconfigure its priorities in the Middle East. In Lebanon, the Administration has coöperated with Saudi Arabia’s government, which is Sunni, in clandestine operations that are intended to weaken Hezbollah, the Shiite organization that is backed by Iran. The U.S. has also taken part in clandestine operations aimed at Iran and its ally Syria. A by-product of these activities has been the bolstering of Sunni extremist groups that espouse a militant vision of Islam and are hostile to America and sympathetic to Al Qaeda.

Now, further evidence that the summation of US aid has fallen into the hands of Al Qaeda in Syria, comes to us from the Washington Post’s Liz Sly who reported in her article, “U.S. feeds Syrians, but secretly,” that:

In the heart of rebel-held territory in Syria’s northern province of Aleppo, a small group of intrepid Westerners is undertaking a mission of great stealth. Living anonymously in a small rural community, they travel daily in unmarked cars, braving airstrikes, shelling and the threat of kidnapping to deliver food and other aid to needy Syrians — all of it paid for by the U.S. government.

Sly then claims that most Syrians credit Al Qaeda’s al-Nusra with providing the aid:

“America has done nothing for us. Nothing at all,” said Mohammed Fouad Waisi, 50, spitting out the words for emphasis in his small Aleppo grocery store, which adjoins a bakery where he buys bread every day. The bakery is fully supplied with flour paid for by the United States. But Waisi credited Jabhat al-Nusra — a rebel group the United States has designated a terrorist organization because of its ties to al-Qaeda — with providing flour to the region, though he admitted he wasn’t sure where it comes from.

And while Sly attempts to spin the story as merely misdirected anger and ignorance on the part of Syrians receiving the aid, it is well documented that bakeries in terrorist-held territory are in fact manned by Al Qaeda militants. In fact, while Sly maintains that “security concerns” are owed for America’s opaque aid distribution operation, it appears more likely the US is attempting to insidiously obfuscate its use of humanitarian aid to help its militant proxies win “hearts and minds” amid a humanitarian catastrophe the West itself engineered and perpetuated intentionally.

The London Telegraph revealed in their February 2013 article, “Syria: how jihadist group Jabhat al-Nusra is taking over Syria’s revolution,” that taking over bakeries was a key strategy used by Al Qaeda’s al-Nusra front to “win over” the population:

Then, in the past weeks, Jabhat al-Nusra – which is outside the FSA – pushed other rebel groups out of the stores and established a system to distribute bread throughout rebel areas.

In a small office attached to a bakery in the Miesseh district of Aleppo, Abu Yayha studied a map pinned on the wall. Numbers were scrawled in pencil against streets.

“We counted the population of every street to assess the need for the area,” explained Mr Yahya. “We provide 23,593 bags of bread every two days for this area. This is just in one district. We are calculating the population in other districts and doing the same there.

The bakery works constantly. Inside, barrows filled with dough were heaved onto a conveyor belt that chopped it into round and flat segments, before pushing the dough into a giant oven. Workers packed the steaming flatbread in bags.

“I am from Jabhat al Nusra. All the managers of all the bakeries are,” said Abu Fattah, the manager. “This makes sure that nobody steals.”

In essence, Al Qaeda is taking over neighborhoods upon a mountain of US-provided flour, in bakeries overrun and held at the barrels of US-provided guns. Just as was planned in 2007, the US is attempting to overthrow the government of Syria with “extremist groups that espouse a militant vision of Islam and are hostile to America and sympathetic to Al Qaeda.”

Humanitarian aid is being used as a political weapon to carve out territory for the West’s heavily armed proxies and extort cooperation from the subjugated people who find themselves inside Al Qaeda-occupied territory.

US Military To Stage on Border to Protect Al Qaeda

The Pentagon now reports that some 200 US troops are on their way to augment an already established US military presence along the Jordanian-Syrian border. CNN reported in their article, “U.S. military to step up presence in Jordan in light of Syria civil war,” that:

The troops, which will number up to 200, are from the headquarters of the 1st Armored Division at Fort Bliss, Texas, two Defense Department officials told CNN.
The deployment “creates an additional capability” beyond what has been there, one official said, and will give the United States the ability to “potentially form a joint task force for military operations, if ordered.”

Exactly where on the spectrum between actual operational intention and psychological warfare the deployment represents is still uncertain. What is certain, is that the US is deploying military assets with the intent of bolstering militant efforts inside Syria and along its peripheries. The astonishing irony is that many of the terrorists operating on both sides of the Jordanian-Syrian border US troops plan on “defending,” may quite literally have been the same militants killing US troops in Iraq and Afghanistan for the past 10 years.

US foreign policy has unraveled to such an extent that it risks unhinging entirely America’s legitimacy and relevance abroad, as well as peace and prosperity at home. 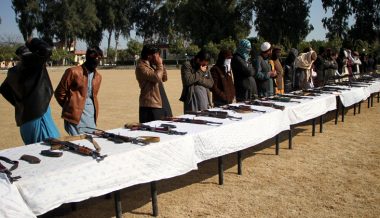 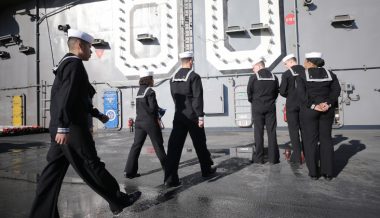