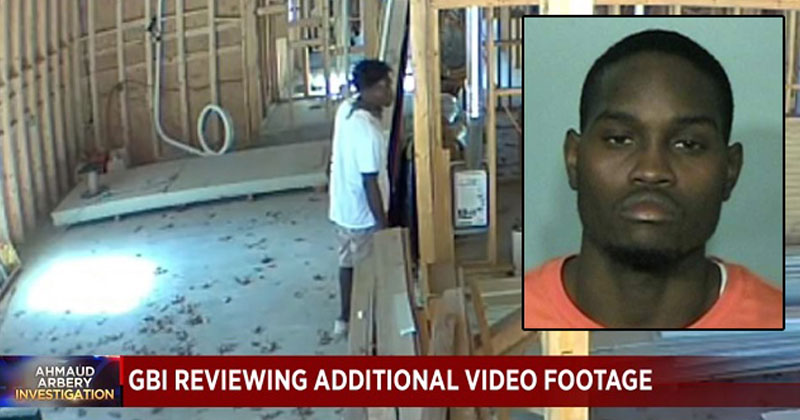 Newly released surveillance videos show Ahmaud Arbery trespassed into a home — which the homeowner says was robbed of $2,500 worth of fishing gear earlier this year — before running away down the street after a neighbor called 911.

Arbery can be seen walking down the street — not jogging — then stopping on homeowner Larry English’s lawn and looking around. After seeing no one was in the area, he then trespassed into the house at around 2:09 p.m. on the timestamp, which is actually most likely around 1:08 p.m as police said the first neighbor to call 911 did so at 1:08 p.m. Arbery is seen exiting the building around 5 minutes later and took off running or “jogging” after 911 had been called on him (possibly by the onlooking man who is seen standing next to a tree across the street that appears to be holding a phone up to his left ear and likely would have been in Arbery’s view).

The first 911 caller can be heard telling police about the trespassing incident and saying the suspect was “caught on camera a bunch before at night” and it’s “kind of an ongoing thing out here.”

He told the dispatcher in real time that he was witnessing the suspect leaving the house and “running down the street” (which suggests he was the onlooker seen on the video).

The second 911 caller, who reportedly made his call at 1:14 p.m., can be heard yelling at a man to “stop,” which was presumably Arbery.

Homeowner Larry English, told The Daily Beast that his house was robbed of $2,500 worth of fishing equipment earlier this year but he did not report it to the police. The Daily Beast said that a 9mm handgun was also reportedly stolen out of Travis McMichael’s unlocked truck earlier in the year.

News4Jax received a 7 second clip from inside English’s home which appears to show Arbery scoping out the joint:

Just out for a jog pic.twitter.com/3WtnxGQ23T

“We are indeed reviewing additional video footage and photographs as part of the active case. It is important to note that this footage was reviewed at the beginning of the GBI investigation and before the arrests of Gregory and Travis McMichael.”

A statement from the attorneys representing Arbery’s family reads in part:

“Our office has reviewed the surveillance video which appears to show a person, believed to be Ahmaud Arbery, entering a property under construction. The individual remains on the property for under 3 minutes before continuing to jog down the road. This video is consistent with the evidence already known to us.”

The McMichael’s own attorney reportedly released the video.

[Brunswick attorney Alan Tucker] says the McMichaels have cooperated fully with the investigation, and that “the video has been in possession of police since day one.”

“The guy who took the video is the one who saw Arbery coming out of the house and said ‘that’s him,'” he told First Coast News.

[…] He says he thought releasing the video would help tamp down rising tensions surrounding the case. “My parents live in Satilla Shores,” Tucker told First Coast News, referring to the neighborhood where the shooting happened. “I didn’t want my community to be burned to the ground. This is a mixed community and they don’t deserve this.”

He told First Coast News he was tired of all the “bullsh*t opinions” about the case.

The video clearly shows Arbery attacked Travis McMichael and was shot while fighting with him for his shotgun.

NEWS: Graphic video appears to show Ahmaud Arbery, 25 of GA., whose family says he was out for a run, confronted by 2 men who shot him dead saying they thought he was a burglar. A prosecutor wants a grand jury to decide whether the men should be charged. pic.twitter.com/kEYYJW7UlM

District Attorney George E. Barnhill, who has worked as a criminal prosecutor for 36 years, detailed what happened in the video in a a public letter on the case.

From said video it appears Ahmaud Arbery was running along the right side of the McMichael truck then abruptly turns 90 degrees to the left and attacks Travis McMichael who was standing at the front left corner of the truck. A brief skirmish ensues in which it appear Arbery strikes McMichael and appears to grab the shotgun and pull it from McMichael. The shot is through Arbery’s right hand palm which is consistent with him grabbing and pulling the shotgun at the barrel tip, the 2nd and 3rd wounds are consistent with the struggle for the shotgun as depicted in the video, the angle of the 2nd shot with the rear of the buttstock being pushed away and down from the fight are also consistent with the upward angle of blood plume shown in the video and that McMichael was attempting to push the gun away from Arbery while Arbery was pulling it toward himself. The 3rd shot too appears to be in a struggle over the gun. The angle of the shots and the video show this was from the beginning or almost immediately became– a fight over the shotgun.

Given the fact Arbery initiated the fight, at the point Arbery grabbed the shotgun, under Georgia Law, McMichael was allowed to use deadly force to protect himself.

Arbery in Dec 2013 was caught bringing a loaded gun to a high school he did not attend and ran from police (or perhaps “jogged”) when they tried to apprehend him.

The New York Times reported that Arbery “was convicted of shoplifting and of violating probation in 2018.”

As I said yesterday, this case is “The Trayvon Hoax” all over again.

Jesse Lee Peterson joins the War Room to talk about the recent race baiting being perpetuated by the media.