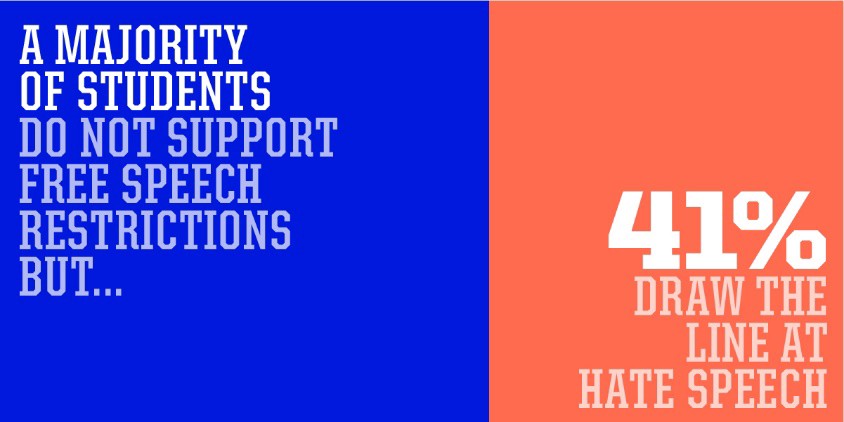 A new survey has revealed that almost half of college students do not believe that all speech should be protected under the First Amendment.

The study, conducted by the Knight Foundation, discovered that students believe that statements or content categorized as ‘hate speech’ should not be protected under the banner of freedom of speech.

A total of 41 percent said they do not think such speech should be protected, while 58 percent believe it should.

Disturbingly, when broken down into demographics of race and gender, the figures show that in some cases a MAJORITY of students believe that not all speech is protected.

A total of 53 percent of college women said ‘hate speech’ should not be protected, as well a more than half of all black students.

When asked if they believe ‘inclusivity’ is more important than freedom of speech, more than 60 percent of black students said they do.

A further interesting finding of the study reveals that 68 percent of college students believe their campus climate precludes students from expressing their true opinions because their classmates might find them ‘offensive’.

A plethora of recent incidents have contributed to the notion that college campuses should no longer be considered arenas of free speech, such as multiple protests against conservative and libertarian speakers like Candace Owens, Milo Yiannopoulos, and Jordan Peterson.

Last month, a Canadian professor described people who consistently speak out in favor of free speech as “vile little sh*tlords” who should be fired from their jobs and harassed in public.

A college president in New York also penned an article titled “A Campus Is Not the Place for Free Speech,” actually seriously arguing against freedom of speech on college campuses.

Meanwhile, a college in Santa Monica sent out a campus-wide email asking students to inform campus police if they hear other students espousing “hate speech,” without specifically describing what it is.

The email, titled “Reaffirming SMC’s Commitment to Diversity and Inclusion” complained that a “outside visitor brought hate speech onto one of Santa Monica College’s campuses.”