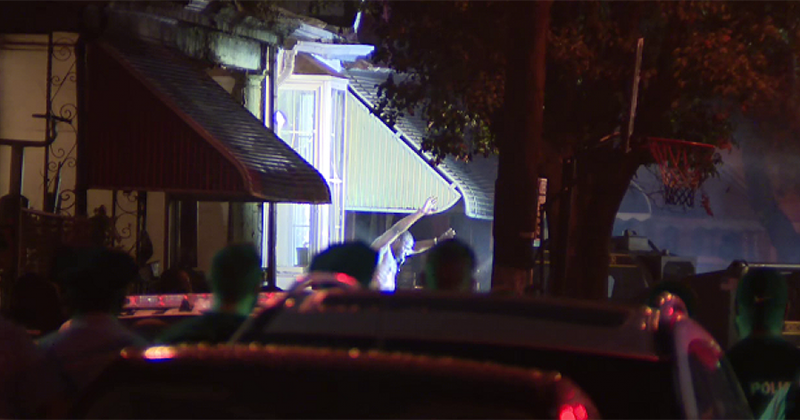 A man accused of shooting six Philadelphia police officers during a standoff that lasted more than seven hours has surrendered to police.

A member of the SWAT team shot tear gas into the home on North 15th and Butler streets around midnight. The suspect, identified by police as 36-year-old Maurice Hill of Philadelphia, then walked out of the home and was taken into custody by police.

He was taken to Temple University Hospital for an evaluation.

#BREAKING: The man accused of shooting six Philadelphia police officers and holding two others hostage has surrendered. Our camera caught him coming out of the home with hands up more than seven hours after it began. Latest: https://t.co/VusluhIx9s pic.twitter.com/qg6f47Pp3h

The arrest ended a dramatic, hours-long standoff in which six officers were wounded by gunfire while another was hurt in a crash. Two Philadelphia police officers and three civilians were also trapped inside the row home with the gunman before they were safely evacuated around 10 p.m. Wednesday.

Will Johnson and Robert Barnes break down the racist intent behind the liberal political agenda.

“SWAT was able to successfully extract the two police officers that were trapped upstairs, as well as three prisoners,” Philadelphia Police Commissioner Richard Ross said. “They were all taken out safely thus far.”

None of the six officers that were shot suffered life-threatening injuries, Ross said, adding that at least one officer suffered a graze wound to the head. The officers were all later released from the hospital.

A seventh police officer responding to the scene was injured in a car accident at the nearby intersection of North Broad and West Cayuga streets. He has been admitted to the hospital.

UPDATE: ALL six officers who were shot have been released from area hospitals. One Officer is being admitted for injuries sustained in a vehicle crash related to the incident. Situation remains active and ongoing.

The standoff with the suspect, believed to be heavily armed with weapons including an AK-47, lasted for more than seven hours before he was taken into custody.

The initial shooting prompted a massive response to the largely residential North Philadelphia neighborhood, which is roughly 2 miles north of Temple University and about 4 miles north of Center City.

Gunfire initially erupted around 4:30 p.m. after narcotics officers served a warrant to a house near the corner of North 15th and West Butler streets, according to officials.

As officers rushed upstairs, a gunman waiting downstairs with an AK-47 fired several rounds through the ceiling. Police returned fire while several officers escaped through windows and doors.

There have been conflicting reports about others who may have been taken into police custody in the aftermath of the initial raid. Police initially said at least one suspect was taken into custody, but Ross said at a press briefing that he couldn’t say with certainty that anyone remained in custody.

Finally, while most of the spectators were respectful of the police, there were some in the crowd that were taunting police according to local media on the scene.

I mentioned this at 10 and since I was harassed during that live shot, I’ll mention it here too. A major moment of disappointment this evening was watching a crowd of people taunt police officers, laughing and yelling at them in the midst of the gunfire. #PhiladelphiaShooting