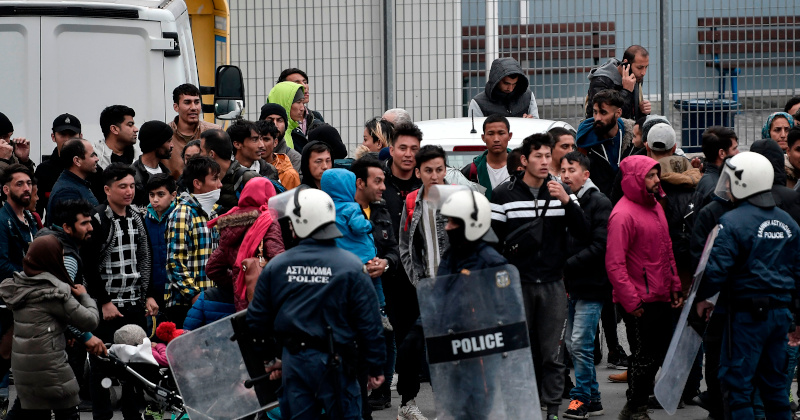 The leader of the anti-immigration Swedish Democrats is determined to discourage migrants right from the off, telling them that they shouldn’t be counting on Sweden’s famed benefits, as the Nordic country is already “full.”

Jimmie Akesson traveled to the Turkish border city of Edirne along with his top aide, having in their sights people set to cross into neighboring Greece.

Over 12,000 migrants amassed there shortly after President Recep Tayyip Erdogan made a power move in proclaiming they are free to continue their journey westward.

While at the border, Akesson and his entourage handed out leaflets discouraging migrants from making it into Sweden. “Don’t come to us. Sweden is full. We can’t give you more money or provide any housing. Sorry for this message,” the flyers read.

He was also pictured talking to aspiring migrants, purportedly delivering his message in greater detail.

The images of the Swedish Democrats (SD) leader made rounds on the party’s social media accounts, garnering numerous shares and comments.

Akesson himself was impressed with what he saw at the border, telling Swedish media that something should be done urgently to stem “the constant flow of migrants on their way to Europe.”

“We have talked to many of them and Sweden, Germany and France are often mentioned as destinations.”

“We need to provide support to Greece to secure the EU’s external border, but also to maintain our own border in Sweden,” he pointed out, adding that the EU border was tested and collapsed back in 2015.

Meanwhile, the Greek border saw intense clashes between police and groups trying to sneak through. Some migrants pelted officers with stones and set objects on fire, prompting authorities to respond with tear gas.

Elsewhere in Europe, countries are vowing not to let migrants in. Some nations accuse Turkey – which harbored millions of potential asylum seekers under a deal with Brussels – of weaponizing migration, while the EU as a whole seems to stand firm on the issue.